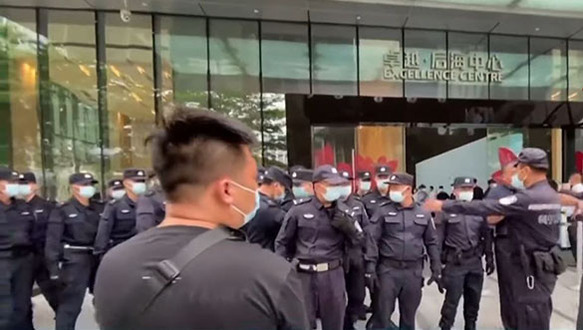 Experts are increasingly pessimistic about the developer's capacity to survive without a government rescue and the resulting repercussions.

A total of 1.6 million apartments are being held hostage by angry property purchasers.  The payment obligations of suppliers who supplied cement, paint, rebar, and copper pipes amount to more than $100 billion.

Employees coerced into financing are worried that the business cannot pay them back on time as promised initially.

According to the Financial Times, China's Evergrande Group, the beleaguered property developer whose soaring debt has sparked fear in global markets, is collapsing under the weight of more than $300 billion in debt.

According to the company's wealthy chairman, workers would "walk out of the darkness as quickly as possible" after the company's financial crisis.

However, for many, the issue is whether the business will be able to navigate its way out of its present difficulty on its own, without the assistance of Beijing.

Experts are also making more gloomy forecasts about Evergrande's capacity to survive without a government rescue, as well as the ramifications of potential bankruptcy.

On Tuesday, S&P Global Ratings issued a gloomy prediction about the company's future, which was received with dismay by investors in Asia.

Beijing, according to the study, would only be forced to intervene if there was a widespread contagion that caused several big developers to collapse at the same time and posed systemic threats to the Chinese economy.

Even though the company's stock and bond prices dropped on Tuesday, the declines were more moderate than in previous days and weeks.

On Monday, shares of other Chinese-focused developers fell sharply, although they regained part of their losses on Tuesday.

The Hang Seng Index in Hong Kong, which had fallen by 3.3 percent on Monday, finished the day with a 0.5 percent gain.

A disorderly collapse for a business of Evergrande's scale may have repercussions across the world's second-largest economy and beyond, including frightening away investors who have placed billions of dollars in bets on the company's long-term prosperity.

A panic may also have a negative impact on China's real estate sector, which is a major source of the country's development but is becoming more vulnerable to high levels of borrowing and unpredictable house prices.

According to Zhiwu Chen, a professor of finance at the University of Hong Kong, the authorities will dismantle the business and sell its components one by one. Zhiwu Chen predicts that the company would be broken up and its components sold separately.

"They are under a lot of pressure to make an announcement as quickly as possible."

The ramifications of a collapse at Evergrande would be heavily influenced by the views of China's senior political leaders.

For decades, it seemed like the Chinese real estate market had no bounds.

Developers like Evergrande constructed cities out of dirt, generated employment, provided something for the middle class to invest their money in, and benefited the local governments who sold them the property they purchased.

Along the way, it spurred unprecedented economic development across the globe.

Prices have now reached an unsustainable level, and Beijing is attempting to cool the market.

It is also attempting to convey a message that no business is too large to fail.

Several of Evergrande's issues result from new limits on house sales, which are being implemented as Beijing attempts to bring down real estate prices and address growing concerns about the cost of housing.

The government has also attempted to send developers who have relied extensively on debt in recent years to expand their properties and fund investments in other companies.

It has become abundantly clear that China's housing industry is very vulnerable in light of the possibility of a default by a behemoth like Evergrande.

Some analysts believe that if the business fails, it will create widespread fear across the property industry, making it more difficult for Beijing to maintain control.