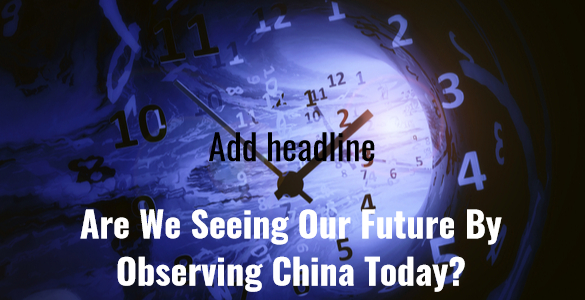 We are getting a glimpse of how terrible the epidemic is going to be in human and financial terms here in the United States. We’ve seen the stock market collapse over 10,000 points, falling as much as 30%! Now we see massive business closings and medical supply shortages that will overwhelm our healthcare system.

The economic consequences are only just getting started. We’re going to see the U.S. and world economy sink into a recession and a massive wave of lost jobs. The fiscal toll on the Federal Debt could add $3-$4 Trillion to our national debt in just the next two years. Longer-term, we could see the Federal Debt soar to over $30 Trillion in the next five years. The only good news is interest rates will be tame, and not compound the additional debt added.

The U.S. and Europe are 2-3 months behind China epidemiologically in this pandemic, but also in terms of the economic damage. It makes sense to see what’s happening in China’s economy to acquire a glimpse of what we can expect to see here in the United States; and the rest of the world.

The Chinese economic data for February—the first month of their lockdown— is showing an unprecedented collapse in readings for business confidence, industrial production, investment, and retail sales. It’s as if the country fell into instant depression.

·        Retail sales on a nominal basis were 20% down despite a surge in online shopping and deliveries.

·        Investment spending and property transactions literally fell off a cliff.

We know that despite today’s news that there were no new coronavirus infections reported in China, its March economic data will not likely be much better and could be worse. In other words, we’re going to see a significant contraction in China’s GDP in the first quarter, which will add up to negative year-on-year growth. Like most of the world, China is now in recession.

The truth is that we don’t know whether the Chinese statistics are accurate. The Chinese play games with their statistics all the time. I had a good laugh when I saw that China claimed that the unemployment rate rose one percentage point to 6.2%. I just don’t trust that number. It’s much more likely that between discouraged workers, work stoppages, regional mandatory quarantine, and resulting bankruptcies, China’s unemployment rate it well over 10% at this point.

The horror of this global pandemic is that it will end in either a global recession or depression that will clobber China’s economy just as its leaders believe the worst of the actual epidemic is over. The Chinese government is still holding an official target for GDP growth of about 6% in 2020. I’m sorry they’ll be lucky if there is any real GDP growth at all when it’s all added up. They’ll be fortunate given the world economic decline not to end 2020 with a negative GDP number.

The U.S. and Europe don’t have the authoritarian power China has, and as a result, they haven’t been able to impose the more draconian lockdowns and quarantines in the same way China has. The latest mandated strict containment measures now taking place in Italy, Spain, and France are now likely to take place throughout the rest of Europe and the Americas. In truth, the world is shutting down just as China appears to be slowly opening up.

The wind down in the United States is devastating businesses of all kinds; airlines, cruise lines, retail businesses, and manufacturing facilities are on the cusp of both mammoth loss and bankruptcy. What we are witnessing is what economists call a “sudden stop” in virtually every economic center other than the hospital industry that will likely be overwhelmed to the point of possible collapse. Hospitals in Italy may have just a few days before they will be unable to handle the demand, and many thousands of people who shouldn’t have died will die needlessly.

President Trump and his sycophantic Kakistocracy of an administration want American’s to believe that “no one saw this kind of devastating epidemic coming, and they have done a great job in dealing with it.” That’s an outright lie. President Trump fired the White House Pandemic Response Team and then belittled the threat of this to the United States citizens.

The Federal Reserve decided to cut interest rates and expand its balance sheet with quantitative easing (literally printing money). This was done in hopes of helping the Trump administration and the G-7 central banks and governments to soften the economic impact, recession in hopes of preventing a global depression.

The passage of the federal relief bill of $850 billion to $1.4 Trillion amounts to over 4% of the pre-crisis GDP Sounds significant. Still, most of this financial commitment won’t have a substantial fiscal stimulus benefit until after the peak of the infection and chaos passes. We can’t expect businesses and factories to re-open and normalization of work to begin for 6-8 weeks, and that assumes the millennials flaunting the warnings don’t make the pandemic much worse. If they do, money appropriated and the efforts of the Federal Reserve is not likely to be enough to prevent a depression.

The consumption share of the U.S. GDP amounts to 68%. This includes spending on transportation services, leisure activity, and hospitality, and eating out amounts to just over $2 trillion, or about 14% of total consumption. A 20% fall in U.S. consumption translates into a direct 2% fall in GDP (8% annualized in a quarter). It’s not likely this pandemic will drop just 20%. It’s likely to collapse by 40%, 50% even 70% given the massive shutdowns from New York to Los Angeles.

The fall out won’t just push us into a nightmarish recession, but possibly a depression. The business bankruptcies, resulting in unemployment and loss of confidence, would be much worse than the 2008-2009 financial crisis.

This new worldwide crisis has pushed U.S. equity into the bear market territory, and this is going to have a detrimental effect on wealth, it will raise equity risk premiums that will deter investment. The demand and consumption shock from virus-mitigation and quarantine measures will cause considerable hardship and income loss for the 14-16 million workers employed directly in the most sensitive consumer sectors, with multiplier effects on the rest of the U.S. and world economy. These and hundreds of millions of workers not get paid will make the consumption shock nightmarish.

The consumption shock will be compounded by a supply shock to the economy because workers can’t go physically go to work. We’re seeing a glimpse of this in the lack of medical supplies and even fistfights in local grocery stores over toilet paper.

China’s economic disaster may well foreshadow what’s coming for Europe, the United States and the rest of the world. It’s going to be ugly how ugly it depends on whether China or any other major country goes through a second wave of seasonal coronavirus infections before we have an effective vaccine or treatment in enough quantity.

I have written many times and loudly spoken out against the United States-China trade war. Tariffs are import taxes President Trump and his team of pretending economists can  not see. President Trump’s insistence on souring relations further by naming the epidemic the “China virus” is so dangerous that he is incapable of understanding the damage this will do to the U.S. economy. It’s going to have a destructive geopolitical impact on supply chains, globalization, and Sino-Western relations, and at home, on public health systems, the nature of work, fiscal legacies, and possibly a third world war.