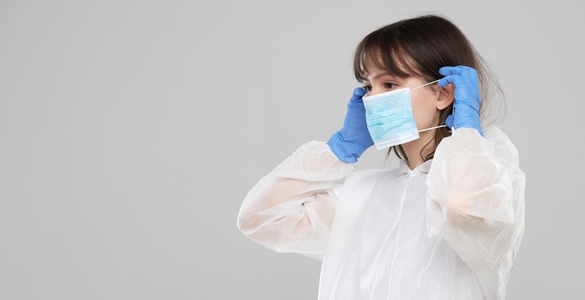 Over seventeen hundred (1,700) physicians, nurses health workers have contracted the potentially deadly Wuhan Coronavirus that has according to official counts infected over 66,000 people and is suspected of having infected as many as 150,000 to 500,000.

The Chinese government continues to predict the coronavirus now called COVAD-19 which is threatening to rise from being a global health emergency to an outright global pandemic, will peter out by the end of April. Nurses, doctors, and other medical professionals in the quarantined area that includes as many as 50 million citizens’ are facing dire shortages of supplies and protective equipment.

Healthcare workers, including physicians and nurses, are regularly using tape to patch up battered protective masks, repeatedly reusing goggles designed to be used only once and are wrapping their shoes in plastic bags because of the needed specialized, foot coverings are unavailable.

Many healthcare workers, after attempting to save the lives of those infected now find themselves stuck at home, feverish and fearful that they have now been infected with the virus. Thousands are working in hospitals' lack of protective gear needed to allow them to help COVAD-19 victims.

Yu Yajie and administrator who works’ in a hospital in Wuhan who now appears to have contracted COVAD-19 said during a brief telephone interview on Saturday with the N.Y Times….

“There are risks; there simply aren’t enough resources,” adding that she was too weak to speak at length. She and thousands of medical workers trying to help the infected and fight against the coronavirus epidemic are often becoming victims, partly because of government missteps and logistical hurdles.

After the virus was discovered in Wuhan in late December 2019, it’s city leaders played down the danger of COVAD-19; as result physicians and medical workers didn’t take the needed precautions to prevent becoming infected. When the health emergency became impossible to ignore, officials in Beijing ordered Wuhan locked down and areas that surround Hubei province. In less than three weeks after the discovery of COVAD-19 Chinese officials then ordered even larger swaths of China under quarantine, but not before some 5 million panicked people escaped Wuhan. The quarantine imposed in all these areas of China may have slowed the viral epidemic, but the restrictions on travel also slowed or even stopped deliveries into these quarantined zones - leaving medical workers short of protective wear essential in preventing their infection.

The number of medical workers infected was announced as being 1,716 including 1,502 in Wuhan, with six reported as having died.

The danger to health workers hasn’t just been from the virus, but China’s local and national communist government. Li Wenliang, a doctor who first identified COVAD-19, died from the virus last week after being humiliated, threatened and punished by police for simply warning friends including other doctors about the outbreak. Li Wenliang’s death has ignited a social media fury in China, where he become lionized as a medical martyr who died because of the ignorance of the Chinese government and police officials. Victim of political incompetence and cover-up over a sound medical strategy being implemented when facing a health emergency.

Cai Yi, head of the division of pain management at Wuhan Central Hospital, the same hospital where Li Wenliang had worked now appears to be one of the thousands of China’s medical workers who could shape how well the Communist Party weathers what has become the worst political crisis in China since Tiananmen Square back in 1989. Cai Yi was quoted in The New York Times as saying…

“Of course, I’m nervous about getting infected…But if we let ourselves be nervous, then what would happen to the people?”

China’s President and Communist Party leader, Xi Jinping, has repeatedly praised hospital workers as heroes and has claimed to mobilize the country in a “people’s war” against the coronavirus. That, however, hasn’t helped hospital workers in Wuhan who are telling reporters from all over the world that is reaching out for interviews. Despite the flowery promises and praise from President Xi, most are saying they feel frustrated and alone.

Left to their own devices, and resources many medical workers are scrambling to buy protective gear with their own money and begging funds from friends and desperately asking for donations of protective equipment from other areas of China and overseas. Others have avoided eating and drinking because they realize going to the toilet means disposing of their safety gowns and they can’t replace and they risk infection simply by flushing the toilet. Because COVAD-19 is more deadly for older victims, younger medical staff members are being assigned to the most critical cases, with the hope that their stronger immune systems will help them recover if they contract the deadly virus.

Malik Peiris, a virologist at the University of Hong Kong, was quoted on Saturday by the NY Times blames the widespread nature of the virus on preventing the virus from being revealed for so long…

“It would have been useful for other parts of China who are beginning to struggle with this outbreak as well for the rest of the world to have these types of data as soon as possible.”

We have little information because Chinese officials failed to disclose how many medical workers were sickened and died as a result of the virus. As of now, health experts still have limited information on how medical workers are becoming infected and whether the rate of transmission is slowing. These omissions make it more difficult for other provinces in China and countries around the world to assess and reduce the risks to their health workers treating patients who have contracted COVAD-19.

Dr. Tedros Adhanom Ghebreyesus, director-general of the World Health Organization, said it is seeking more information about the time and circumstances surrounding the infections of health care workers. He has made an effort despite the lack of cooperation from the Chinese government to praise their response in hopes of getting the needed information and data…

“This is a critical piece of information because health workers are the glue that holds the health system and outbreak response together.”

Dr. Ghebreyesus has come under sharp criticism for “playing the game” of appeasing the Chinese government while doctors and other hospital workers remain under pressure not to speak out. But many do, out of desperation despite the risk of being arrested, fined or even made to “disappear” suddenly.

Chang Le, a doctor at Hankou Hospital in Wuhan, said in an online message, pleading for more medical masks saying…

“For the first time, I felt helpless confronting the system… it’s only today that I’ve grasped just how hard it is for us front line medical workers.”

Dr. Le’s plea and expression of frustration and fear were quickly deleted from social media by the Chinese government.

The Chinese government is acknowledging the shortages of medical supplies and repeatedly promised to accelerate deliveries. But dramatic and tight restrictions across China on travel designed to contain COVAD-19 have and continue to slow the production and delivery of desperately needed medical equipment.

An increasing number of hospital workers are coming forward on social media, saying the gowns and masks that do reach them are not of high enough grades to withstand a viral contagion.

Outside the Wuhan Fourth Hospital, medical workers were observed waiting near a truck as a delivery man in a full-body medical suit handed down boxes of masks and gowns to them. A medical worker who insisted on not being identified was quoted echoing the frustration shared by so many medical workers when getting a look at the gear being delivered. Saying, the quality of these supplies is hopelessly inadequate…

“But this is all we could get…We just have to accept what they send us.”

Dr. Peng Zhiyong, 53, head of the department of critical care medicine at Wuhan University’s Zhongnan Hospital, said in an interview earlier this week that his team was running dangerously low on full-body medical suits and N95 masks — a type of respirator best suited to guard against viruses.

“We can only get one break during the entire day; Just one, to drink water and eat because if you leave, you don’t have any new suits to get back into.”

Officials in the city of Xiantao in Hubei, realizing how deadly the COVAD-19 virus was, insisted that some companies in its area that make protective medical clothing and masks could not reopen their factories until February 14. The outcry for equipment and supplies that followed forced city and provincial officials to allow 73 of these companies to resume operations knowing full well that the workers coming back to work could cause the crisis to get much worse.

Health workers in China have been trying to follow WHO guidelines to use “standard precautions,” which include surgical masks, rather than more expensive N95 masks, to cover their mouths and noses. Meanwhile, the Centers for Disease Control and Prevention has instructed health care providers to use N95s, which block out much smaller particles than surgical masks do.

Bottom line unless the Chinese government makes more attention and a better effort to safety and fate of the country’s medical workers, the danger will likely grow exponentially worse. A collapse in the number of health care providers could guarantee that this epidemic could rival the Spanish Flu epidemic of 1918 and end up infecting tens of millions and killing a half-million or more just in China.