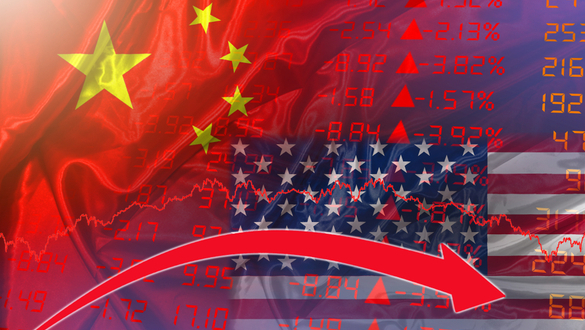 Chinese President is playing hardball and reportedly refusing to sign ‘Phase 1” of a new U.S. Chinese trade war settlement unless all tariffs on its U.S. imports are lifted. China has experienced a wave of nationalism set off by a national military parade marled the founding of the People's Republic of China.

While President Trump is suffering a steady series of political and legal losses that could lead to his being impeached by the United States House of Representatives and possible criminal indictment in New York City, Beijing has added to his headaches by doubling down on demands that may threaten to delay or kill the preliminary trade agreement being described as ‘Phase 1’.

The catalyst for the increased Chinese resolve was set in motion by of all things a military parade held October 1 celebrating the 70th anniversary of the People's Republic, and it’s Communist Party wrapped up its fourth plenary session of the current Central Committee that further strengthened President Xi Jinping grip on power.

President Xi’s increased power and the wave of Chinese nationalism have emboldened Beijing to insist that the U.S. drop all of the tariffs levied by President Trump since the summer of last year before executing even ‘Phase 1’ of the trade agreement.

This new demand could enrage U.S. President Donald Trump and reignite tensions between the two largest economies in the world.

The Chinese and U.S. negotiators were in the process of finalizing a ‘Phase 1’ compromise that would both dramatically increased Chinese imports of U.S. liquefied natural gas, as well as agricultural products like soybeans and other farm products that would help reduce the U.S. trade deficit of approaching $420 billion last year with China. The ‘Phase 1’ approach would have put aside for now addressing structural issues, focusing on specific steps to have China expand American imports to reduce further or eliminate the Chinese trade deficit.

A further complication that has arisen if China’s unwillingness to agree to $50 billion worth of farm goods purchases annually over the next two years because of an epidemic in the country’s pig farm sector that will dramatically reduce its need for soybeans for the next 3-4 years by some estimates. As a result, Trump’s insistence of China buying $50 billion in U.S. agricultural projects has been described by Chinese negotiators as ‘unrealistic.’ Chinese negotiators have instead offered to increase U.S. farm imports back to the $20 billion range, the size of Chinese imports before the trade war.

Now The People's Daily, a Communist Party mouthpiece, published a piece at the beginning of the month, declaring that lifting all U.S. tariffs on Chinese imports is a prerequisite for the ‘Phase 1’ trade agreement. In the summer of 2018, the White House slapped duties of up to 25% on about $360 billion worth of Chinese imports.

According to The Financial Times…

“Trump administration officials are considering a partial reversal of the 15% tariff applied to $112 billion worth of Chinese imports on Sept. 1 and a chance the Trump administration would consider lifting tariffs on $156 billion on consumer products, like smartphones, that are supposed to go into effect next month in exchange for the ‘Phase 1’ agreement.

Making negotiations harder has been U.S. Trade Representative Robert Lighthizer warnings that if China backtracks on its pledges once the duties are lifted the U.S.  would re-impose tariffs unilaterally, while still holding China to every part of the ‘Phase 1’ deal. Beijing, however, is insisting on a fair and equitable deal and is rejecting any unilateral approach that would allow the U.S. to restore tariffs on Chinese imports.

Trump is also insisting holding a signing ceremony in the U.S., in the electoral battleground state of Iowa to help him drum up support from his base among farmers, especially as he faces impeachment hearings. President Xi Jinping, on the other hand, insists he would not travel to the U.S. for fear Trump and his China hawks will try to impose an unwanted surprise at the eleventh hour on Trump's home turf. Xi is not going to allow himself to be embarrassed.

All of this back and forth, however, may short circuit the ‘Phase 1’ deal now that China is demanding a complete lifting of U.S. tariffs on its imports. Given President Trump’s  repeated claims that he will be signing a ‘Phase 1’ deal with China later this month the question is will he become so enraged that he immediately imposes the tariffs on $156 billion on consumer products, such as smartphones, that are supposed to go into effect in December immediately as a retaliation for the new Chinese demands?  If Trump does retaliate in the way he has in the past, we could see financial markets worldwide suffer another extended period of heightened volatility.