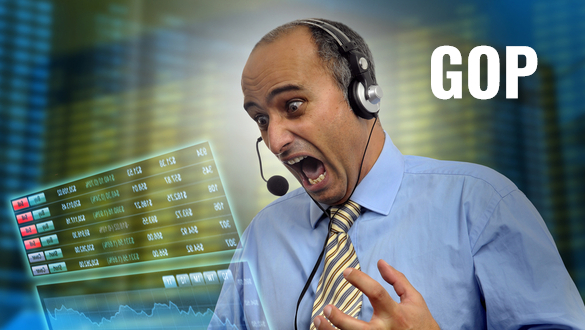 President Xi Jinping is holding back on his retaliation against President Trump’s latest escalation of his trade war against Beijing which will add import taxes on about $112 billion in Chinese imports, including many consumer food items, household goods, and apparel.

“We firmly reject an escalation of the trade war, and are willing to negotiate and collaborate to solve this problem with a calm attitude,”

The market has jumped on China’s apparent pause from escalating the Trump trade war. Now news reports indicate that GOP politicians up for re-election in 2020 are voicing their concerns that with just 14 months left before Election Day, President Trump seeing polls showing a Democratic Tsunami approaching may make a bad deal with China in hopes of saving himself.

Geoff Garbacz, the editor of the Gold and Energy Trader, said in an interview with WallStreetRebel.com that a lousy deal might send the stock market higher because at least it would resolve the economic pain being inflicted by Trump’s import taxes…

“The Chinese pause in retaliation is designed to see if Trump delays his latest retaliation of raising tariffs he announce a week ago before he left for the G7 in France.”

“Xi may also be waiting to hear if Trump is willing to capitulate on his demands that require the Chinese to change their economic system.”

Garbacz warns that the current rally on Wall Street could quickly turn into another route if Trump doesn’t agree to what would be called by many a “bad deal.” The Farmers Union, The Chamber of Commerce, other big business organizations and FOX News is turning on President Trump.

An increasing number of economists are predicting a strong possibility of a global and U.S. recession in 2020. The pressure is building on Trump re-election prospects as his trade war seems to bring with it a string of bad economic news. Earlier this week it was reported that pending home sales reversed its positive growth rate, falling 2.5% despite low mortgage rates.

“China has plenty of means for countermeasures.”

The Chinese could quickly decide to strike back in retaliation and forgo its stated interest in negotiations.