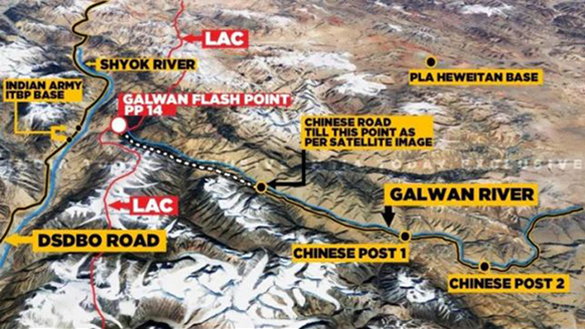 World War III may not involve nuclear weapons or even traditional weapons or armed forces crossing borders. China is making it clear to India they could shut down the country’s electricity and push the country back into an electricity void 19th Century society.

As animosities grow on the Chinese India border and border skirmishes escalate, the Chinese have begun using malware to shut down India’s electric grid. A blackout that hit Mumbai now appears to have been the opening attack on India by China and has all the telltale signs of a clear warning.

The New York Times reports that early this past summer, the military clash between the Chinese and Indian troops on the remote Galwan Valley, which is on the border of both countries, began with the two sides taking turns bashing each other to death with rocks and clubs. The deadly conflicts made news around the world. Then all of a sudden, the violence died down.

We are now learning through press reports from The New York Times that four months after the conflict in the Galwan Valley and more than 1,500 miles away in Mumbai, India, the city of 20 million people went completely dark. Trains, Airports, the city’s stock market suddenly experienced a complete blackout. Hospitals had to switch to emergency generators to keep ventilators running amid a coronavirus outbreak among India’s worst.

A new study on the event now indicates that the conflict in the Now lends weight to the idea that the conflict on the remote Galwan Valley border of China and India resulted in a daring and expansive cyber-attack on India’s power grid.  It was a warning by China that if India pressed its claims too hard on the Galwan Valley border, the lights and anything tied to India’s electric grid could be taken down and push the entire country of 1.4 billion people into the pre-electrical age.

“The Indian sponsored study by Recorded Future, a Somerville, Mass., shows that as the standoff continued in the Himalayas, taking at least two dozen lives, Chinese malware was flowing into the control systems that manage electric supply across India, along with a high-voltage transmission substation and a coal-fired power plant.”

According to the New York Times….

“The discovery raises the question about whether an outage that struck on Oct. 13 in Mumbai, one of the country’s busiest business hubs, was meant as a message from Beijing about what might happen if India pushed its border claims too vigorously.”

Meanwhile, Indian officials have gone silent about the Chinese cyber-attack. They have no commented on whether it set off the Mumbai blackout and the evidence provided to them by Recorded Future that many elements of the nation’s electric grid were the target of a sophisticated Chinese hacking effort.

“It is possible the Indians are still searching for the code. But acknowledging its insertion, one former Indian diplomat noted, could complicate the diplomacy in recent days between China’s foreign minister, Wang Yi, and his Indian counterpart, Subrahmanyam Jaishankar, to ease the border tensions.”

The New York Times says investigators who wrote the Recorded Future study said that… “the alleged link between the outage and the discovery of the unspecified malware” in the system “remains unsubstantiated.” But they noted that “additional evidence suggested the coordinated targeting of the Indian load dispatch centers,” which balance the electrical demands across regions of the country.

The discovery shows how easy conspicuous placement of malware in an adversary’s electric grid or other critical infrastructure has become the newest form of both aggression and deterrence. A warning that if things are pushed too far, tend of million even billions of people could plunged back into a pre-electric 19th Century.

Retired Lt. Gen. D.S. Hooda, a cyber expert who oversaw India’s borders with Pakistan and China, was quoted by The New York Times as saying…

“I think the signaling is being done” by China to indicate “that we can and we can do this in times of a crisis.”

“It’s like sending a warning to India that this capability exists with us.”

The reality is that both India and China maintain medium-sized nuclear arsenals, which have traditionally been seen as the ultimate deterrent. But neither side would risk a nuclear exchange in response to bloody border disputes over the Line of Actual Control. In this ill-defined border demarcation, long-running disputes have escalated into deadly conflicts by increasingly nationalistic governments. But China has the hacking advantage and could plunge India into darkness for days, weeks, even months. China recognizes cyberattacks give them another option — a much less devastating alternative to a nuclear attack, but still enough of an attack that gives it a military and psychological edge.

Russia was the pioneer in using this technique when it turned the power off twice in Ukraine several years ago, and that capability has U.S. defense agencies on high alert. Especially after last year’s revelation by the Department of Homeland Security announced publicly that the American power grid was littered with code inserted by Russian hackers, the United States put code into Russia’s grid in a warning to President Vladimir V. Putin.

The new Biden administration promises that within weeks it will respond to another intrusion — it will not yet call it an attack — from Russia, one that penetrated at least nine government agencies and more than 100 corporations.

The real issue is, will these attacks trigger a third world war even if it isn’t nuclear? China’s shift to this approach is a considerable change. Its focus had been on information theft. Had been its number one priority, but now Beijing appears increasingly active in placing code into infrastructure systems throughout the world’s nations as a potentially crippling non-nuclear weapon.

The downside for China is that their technology is beginning to face a boycott. U.S., French, English, Germ, and other government authorities have made it clear that they are reviewing what happened in India and in the United States and are considering a complete boycott of Chinese technology companies.