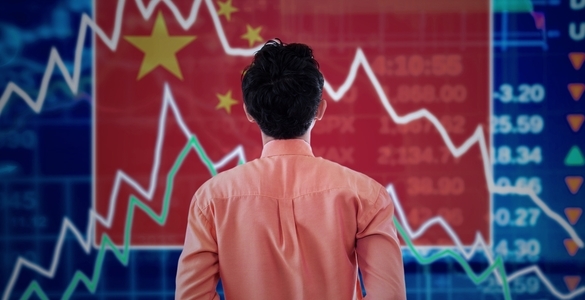 The Chinese government announced an additional 2,590 cases of Coronavirus cases being diagnosed on Saturday, with 45 deaths bringing the total number of infections to 14,380 and 304 deaths. The damage to China’s economy and financial markets could be devastating.

Few analysts believe China’s central bank’s decision to use reverse repurchase agreements to supply 1.2 trillion Yuan of liquidity on Monday, with the figure coming to 150 billion Yuan ($21.7 billion) on a net basis is going to stop the selloff in China that had investors panicking on Friday and saw the Dow Jones close down over 600 points.

“This is well beyond the band-aid fix…”

Yet, even in his optimism, Innes warned…

“If this deluge doesn’t hold risk-off at bay, we are in for a colossal beat down. In addition, the Peoples Bank of China (PBOC) will likely intervene in the currency market, so I would expect them to layer the soothing market balm thick and heavy.”

So far, Chinese stock futures tracked by the Singapore Exchange have fallen 7.5%, suggesting a painful opening for the mainland market after the end of the Chinese Lunar New Year holiday. Since China’s onshore currency and futures markets last traded on January 23rd, the offshore Yuan has weakened 1%, briefly falling below 7 per U.S Dollar for the first time this year. 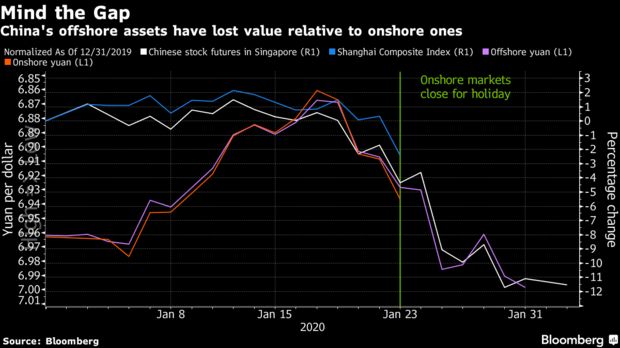 Meanwhile, the concern over the Coronavirus has wiped out all of the gains made in the U.S. major stock indexes since the beginning of the year. The losses sustained in developing nations stock exchanges have wiped out almost two years of gains.

Mansoor Mohi-uddin, a senior strategist at NatWest Markets in Singapore, is one of the millions of investors, traders and market professionals that are hoping China’s regulators' latest steps will…

He hopes that it will help investor sentiment in onshore and prevent the Yuan from weakening from the critical 7 support level.

We at Wall Street Rebel are not convinced China’s moves will stem the downturn in Chinese or the global markets.

We at Wall Street Rebel believe that with the numbers of those infected with the Coronavirus growing substantially daily, the effect on both the Chinese and global economic markets is going to be much worse than we’re being told.

The argument for a limited impact on the world economy is that with a severe but short-lived impact. It could take China’s first-quarter gross domestic product growth down to 4.5% year-on-year, according to Bloomberg Economics. That would be the lowest quarterly figure since at least 1992.

Ipek Ozkardeskaya, a senior market analyst at Swissquote Bank, believes as we do that the US$22 billion and the regulatory relaxations ordered may make…

“The efforts may look like trying to counter a tsunami with shovels.”

Many people suspected of being sick with the Coronavirus in Wuhan aren’t being counted.

The official count of those infected and who have died may be way off due to the severe shortage of tests, according to Caijing, a Chinese media company. According to Caijing, the Saturday report was deleted from the internet Sunday because the deaths were recorded due to viral pneumonia and not pneumonia caused by the Coronavirus.

“An unidentified doctor from a Wuhan hospital designated for Coronavirus treatment said that they had admitted about 600 severe cases, but none of these patients were confirmed as having Coronavirus due to a lack of tests.”

WSR believes that the numbers of those infected may be closer to 100,000 people than 14,380 cases reported on Saturday and that the number will be raised substantially on Monday or Tuesday. We believe this will lead to more panicky selling in markets around the world.

We believe we’ll see a relief rally here in the United States as the major indexes cross or approach the 5% down level. Computer trading will likely take over and view the selloff as reaching its apex. This will give institutions like Goldman Sachs a chance to pair their positions or buy the bounce if they believe this selloff isn’t going to turn in to a 10% correction.

Make no mistake, if the numbers of those infected with the Coronavirus swells in number to the previous estimate of 190,000 that circulated last week as to where we will be by mid-February, the chances of the U.S. stock market indexes dropping 10% will 80% to 90%.