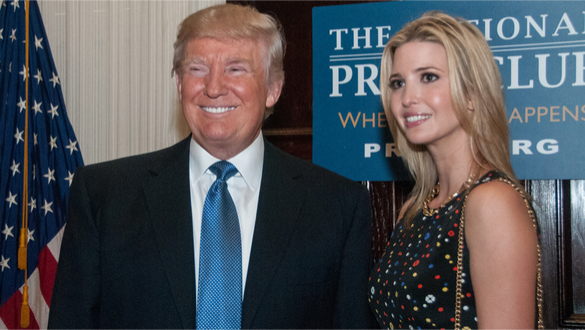 There’s no end to President Trump’s corruption and self-dealing.

The Associated Press is reporting…

“China has granted Ivanka Trump’s business preliminary approval of five new trademarks ahead of next week’s trade talks with the U.S.”

Besides granting trademarks for wedding gowns, sunglasses, and child care centers, the Chinese granted the fifth trademark for a charitable fundraising, art valuation and brokerage firm that was approved earlier this month, online records posted by the Chinese government’s trademark office indicate. The fundraising trademark is especially ironic given her, her brothers and the President’s being barred from being involved with charities by NY State following the dissolution of the Trump Foundation.

Critics and legal analysts are concerned that the approvals of these trademarks for the President’s daughter who works in the White House amounts to a bribe and places the President and U.S. government in China’s debt, and exposes to pressure in the trade negotiations.

AP reported Ivanka Trump’s representatives to insist the trademark applications are a routine business practice and are solely designed to safeguard her name from any criminals or trademark squatters from attempting to profit from her fame. Given the many conflicts of interest President Trump has at this point, the claim that… “there’s nothing to see here, seems eerily familiar.