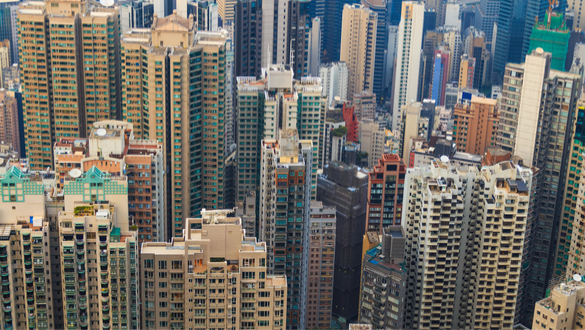 China continues to be a riddle wrapped in an enigma

As of 2016, China’s empty apartment units could house New York City 27 times over.

What does this mean to you? There are a lot of carry-on effects from wasting so many resources. As you delve into a thought exercise to get more acquainted with the ruinous consequences of credit bubbles, be grateful that you don’t really have to worry about malicious genies magically tagging you with mortgaged deeds.

That could be scary. Imagine that some cruel genie took a perverse dislike to you. What worse instance of malevolent magic could the genie perform than to present you with deeds to the astonishing inventory of 70 million empty apartments’ structures accumulating dust throughout China?

You might think it would make you a billionaire, a real estate magnate on par with Donald Trump. But think again.

This may be a good moment to re-tell an uncharacteristically charming story Donald Trump told of himself dating to the S&L crisis of the late ‘80s and early ‘90s.  That was a time when 1,043 out of the 3,234 savings and loan associations in the United States failed as they tried to digest billions in over-mortgaged real estate.

At that time, Donald Trump found himself walking the streets of the Upper East Side of Manhattan one evening with his girlfriend of the moment. As they walked, they came upon a bum in a tattered pea coat lying on a grate. Trump remarked to his companion, “That guy has $1 billion more than I do." She responded, "but he doesn't look like he has a penny.”  Trump replied, “He doesn’t.”

When he said that, Trump’s fortune was hostage to the banks to which he owed about a billion dollars more than his properties would have realized in a fire sale. I describe this “as an uncharacteristically charming story,” because Trump is hardly famous for making jokes at his own expense. None the less, he confirmed to me in a conversation that the account I share with you above is true. It shows Trump at his best, humorously acknowledging the implications of double entry bookkeeping.

With that in mind, how could you afford to pay the construction mortgages on 70 million apartment units with no residents deeded to you by the evil genie?  A challenging question.  You would have to do some fast talking with the Chinese banks of the sort Donald Trump managed with New York banks decades ago during the S&L Crisis.

Your only hope of avoiding being sucked into a black hole of debt defaults would be to hire some creative scoundrels disguised as accountants to help you persuade the banks to lend you additional billions (or more probably, trillions) to postpone the day of reckoning. Note that the extent to which you could succeed would only make the ultimate mal-investment problem worse. Your assets would not be enhanced in any way by being encumbered with additional debt. They would just become more costly.

Could you keep kiting the debt?

That is at least a $36 trillion question, maybe a $45.9 trillion, or possibly even a $116.6 trillion question. The right answer depends on China’s actual debt level. Unlike Trump’s challenge of three decades ago when the systemic debt issue was denominated in billions of dollars, the Chinese bad debt problem is 1000 times worse.  Forbes reports the estimate of Prof. Victor Shih of the University of California San Diego. Shih believes that Chinese official debt figures have proven woefully inadequate.

If you are a connoisseur of forbidden truths, as I am, you don’t take official figures at face value. You keep digging for tells that reveal the real story. I am convinced that Chinese government statistics are as bogus as those in the US. And more so. Professor Christopher Balding of HSBC Business School, Peking University, an authority with good sources in the People’s Bank of China’s Financial Stability Board, recently did some subversive arithmetic combining “on balance sheet assets” with “off balance sheet assets.” (Remember, while debts are liabilities to the borrowers, they are assets to the lenders). His conclusion — total debt in China is a breath-taking 833% of GDP. That means debt of roughly $116.6 trillion.

The real debt level could be three and a half times higher than suggested by official figures. The National Development and Reform Commission says Chinese debt amounts to 260% of GDP (36.4 trillion). The IMF accepts a lower official estimate of 230%. But if Balding’s report of 833% is correct, this is a matter of capital importance to the world economy and your investments.

Annual Interest Payments of 29% of GDP?

Remember, interest rates in China are not as minuscule as those in the US or negative like those in Europe and Japan. Assume the average interest rate paid is equal to the short-term interbank deposit rate of 3.5%. Balding observes, "this would imply financial services costs to the economy of 29% nominal GDP.”  A large nut to crack. Even Chinese growth rates would not come close to covering annual carrying costs of 29%.

Is it possible that Balding is right?

Yes. I see several hints that he is.

For one thing, almost every Chinese bankruptcy case brings evidence of undisclosed liabilities of individual companies. Balding observes, “it is common to find enormous amounts of undisclosed debts or (Enron-like) asset management products in Chinese bankruptcies or defaults.  This underscores the suspicion that the actual level of debt has been low-balled. It also means, in Balding's words that “official on balance sheet financial figures are wildly wrong with disastrous consequences.”  He warns, “this implies that we need to rethink the entire story of Chinese development and finance since probably about 2000.”

Balding continues, “Excessive indebtedness is distributed in virtually every sector of the economy. Before, if there was a shock to the corporate sector, householders and the government could step in and help. Now, however, there is virtually no sector of the Chinese economy that does not have an enormous indebtedness. Distributing it throughout simply lowers the capacity to handle a shock.”

Speaking of “shocks,” you should not be shocked to learn that Balding was fired from his post at Peking University after discussing his conclusion — based on PBOC data — that total debt in China has surged to 833% of nominal GDP. In a corrupt world, where people have trillions of reasons to lie about the economy, (and some have no doubt lost their lives for failing to heed them) the firing of Professor Balding is as close as you can expect to come to official confirmation that his numbers are correct.

A way of re-stating Balding’s revelations is that no one knows who owes what to whom or how much can be settled before the whole Chinese house of cards collapses. Estimates of bad debt in the Chinese banking system run as high as 50% of GDP — or about $7 trillion, far more than enough to make the banking system insolvent.

A collapse of China’s asset bubble lies ahead. I doubt there are any Chinese tycoons strolling the streets of Shanghai with their girlfriends making jokes about street people being a trillion yuan richer than they are. That underscores a problem when the government of a country enlarges debt to magnitudes beyond the scale of assets held by even the richest persons. That makes it all the more unlikely that mortgaged assets can be redeemed from hock while encumbered by anything like their current level of debt.