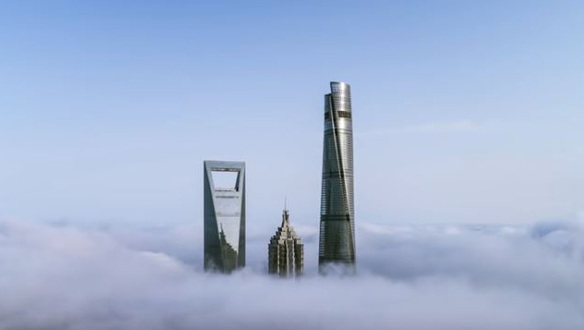 China has just completed construction of the world's highest luxury hotel, which offers a restaurant on its 120th floor and 24-hour concierge and butler services. Meanwhile, the United States government will spend up to $1.2 Trillion over the next eight years to repair its 20th Century infrastructure.

A good symbol of the strides towards Chinese infrastructure dominance can be seen in Shanghai, China's largest city with an estimated 26 million people, where the world's highest luxury hotel, boasting a restaurant on the 120th floor and 24-hour personal concierge and butler service, has just enjoyed its grand opening.

The hotel's elevators can rocket guests up the intimidating spiral-like skyscraper at the ear-popping speed of 40 miles an hour. The J Hotel's 165 opulent rooms are described as breathtakingly modern with all the luxury a billionaire would expect to find.

The hotel occupies the top floors of the more than 2,000 feet Shanghai Tower in the city's financial district; it's still only the second-tallest building globally after Dubai's Burj Khalifa.

The J Hotel was delayed mainly due to the Covid-19 pandemic, but the hotel is not only fully staffed. Still, it has begun receiving well-heeled guests who can call on the services of a dedicated butler/concierge at any hour, day or night.

While the J Hotel has a magnificent restaurant on the 12oth floor, it has seven restaurants, bars, a drop-dead spa, an 84th-floor swimming pool, and all the other usual trappings of a luxury hotel.

The J Hotel isn't cheap. The grand opening "special experience rate" of $450 a night is compatible with the rate charged by Trump's Washington hotel; with one caveat, there are 34 suites that rent for as much as $5,000 a night. These elegant super luxury suits come with crystal chandeliers and a private sauna.

"On the day of our opening, even the web page was overloaded with so many visitors with strong interest, and they have such (a) strong will to come and experience our hotel."

"Of course, this is very encouraging to all of us, but at the same time, we are committed to making sure that all our guests are well taken care of."

The J Hotel is mind-boggling when you consider that thousands of roads, bridges and other forms of U.S. infrastructure are on the verge of collapse. The $6 Trillion President Biden wants to spend on U.S. infrastructure amounts to 1/5 of the $30 Trillion that it has been estimated it would take to just repair and replace U.S. essential infrastructure.