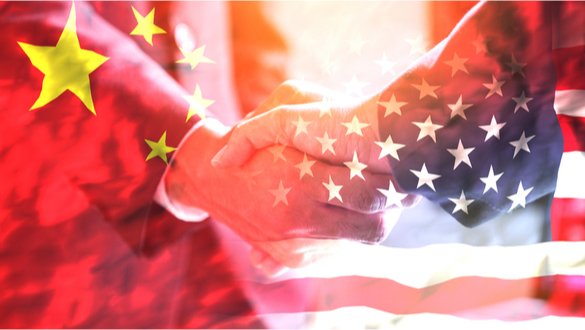 The Dow Jones soared over 400 points on news that the Trump Administration has reached a partial deal, or rather temporary truce with China with regard to the trade war between the world’s two largest economies.

Euphoria has Wall Street in celebration of the news that the U.S. and China reached a partial trade agreement today, that could signal that a temporary truce in their trade war may lead to a broader deal according to a report by Bloomberg News that cited unnamed sources.

According to the Bloomberg New report a partial deal calls for China to agree to some additional agricultural purchases in exchange for the U.S. providing some relief on tariffs including concessions to insure Chinese technology giant Huawei business

There is no guarantee the two sides will be able to a larger or comprehensive trade agreement, but reaching a mini deal will allow U.S.-China trade talks to continue.

The news at this moment describes the pact as tentative.  Wall Street clammers and reacts to anything remotely positive, and with news coming amid expectations about a "mini-deal" that would potentially involve concessions ahead of, such as China offering to buy more American agricultural products or the U.S. pulling back on tariffs the reaction was expected. U.S. stocks SPX, +1.59% DJIA, +1.59% all soared on the rumor of the mini deal.