Capitol Fence is Being Erected Again Due to Security Concerns 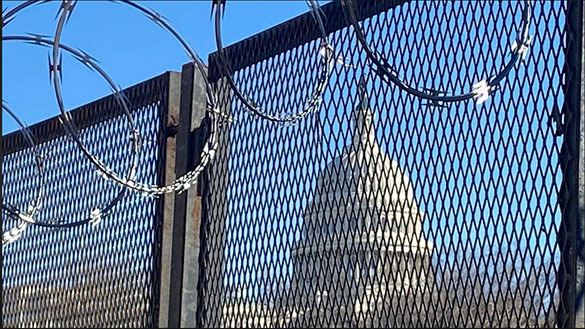 On Monday, the Capitol Police stated that the United States Capitol barrier will be re-erected in time for the pro-Trump rally on September 18.

Deputy Capitol Police Chief Thomas Manger told reporters in the Capitol that the barrier would be up a day or two before the event and would be removed as soon as possible if everything went smoothly.

Just moments earlier, Manger and the sergeants of arms from both chambers briefed top congressional leaders on intelligence gathered by law enforcement in advance of Saturday's "Justice for J6" rally at the Capitol, which will draw attention to the treatment of hundreds of people arrested during a riot on January 6.

After the intelligence briefing, Senate Majority Leader Charles Schumer (D-New York) declined to comment on the threat earlier on Saturday.

He did, however, express confidence that a similar catastrophe like the one that happened on January 6 would not happen again.

"They seemed to be well prepared. We're far more prepared now than we were before January 6. I think they are well prepared for anything that may happen, "He said.

Allies of former President Donald Trump have started a remarkable effort to rewrite the history of the deadly Capitol riot by referring to those accused of engaging in it as "political prisoners."

Preparing for a rally at the Capitol on Saturday is part of an ongoing effort to explain away the horrific assault and obscure what was on display for all to see. Rioters loyal to the then-president storming the building, fighting with police, and attempting to prevent Congress from certifying Democrat Joe Biden's election as president.

The event, which "Looks Ahead America" is organizing, is being publicized in the press to be peaceful, despite several thousand people being scheduled to participate. Organizers have urged participants to be attentive and courteous while at the protest and keep in mind the reason why it is being held in the first place.

Although it is unclear how many people will come or how strong the demonstration will be on Saturday, law enforcement authorities seem to be taking no chances.

A security barrier around the Capitol has been requested, and reinforcements have been brought in to assist Capitol Police, whose leadership has been reprimanded and summarily dismissed for handling the January 6 event.

Right-wing extremist groups and other Trump supporters that flocked to the Capitol in January are expected to return. Still, it is unclear if they would participate in the current protest.

The extremist groups are concerning because, although making up a small percentage of the rioters on January 6, the Proud Boys and Oath Keepers are being held accountable for some of the most serious crimes committed during the event.

In addition to promoting the event and others like it in cities around the nation, protest organizer Matt Braynard has been drawing attention to the "prisoners" who are being unfairly punished for their involvement in the January 6 incident.

"I am extremely proud of all of the brave Americans who participated in these protests when their freedoms were endangered, just as so many others are currently being held in jail for expressing their First Amendment rights," he said in a July news release.

Braynard refused to respond to further email inquiries, and The Associated Press declined to accept the conditions he established for a potential interview with the newspaper.

Many Republican legislators who supported Trump's attempt to dispute Biden's win are boycotting the Saturday event, even though many of them still think the election was rigged, despite multiple court proceedings filed by Trump's supporters that have failed to substantiate those allegations.

Trump has hinted that he may run for president again in 2020.

More than 600 people have been charged with federal crimes connected to the disturbance, which has left dozens of police officers injured and lawmakers fleeing for their lives.

Five people were murdered in the event, including Trump supporter Ashli Babbitt, who was shot and killed by police while attempting to break into a foyer outside the House chamber.

Hundreds of people were charged with misdemeanors for illegally entering the Capitol, and hundreds more were accused of crimes such as assault, obstruction of an official procedure, and conspiracy, among other things.

As part of their investigation, officials look into whether the attack was planned and have filed the most serious accusations against members of two far-right extremist groups, the Proud Boys and the Oath Keepers.

Although authorities first considered it, no one has been charged with sedition since the event on January 6.

More than 60 people have pleaded guilty, most of them to minor offenses related to their involvement in the Capitol protests.

Only a few of the accused are currently being detained in jail, awaiting trial.

Lawyers for the defendants in the D.C. jail who were detained on January 6 have raised worry about the overly harsh conditions in which they are being held in what has been dubbed the "Patriot Unit."

According to the Associated Press, the alleged Capitol attackers face tougher penalties than others, including Black Lives Matter protesters, due to their political views.

However, a review of judicial decisions by the Associated Press refutes this claim.

Adam Schiff, a Democrat from California who chairs the House Intelligence Committee and is a member of the select committee probing the January 6 assault, said anyone who violated the law must be punished because "otherwise, we simply explain, excuse, and promote more of the same."

Schiff is also a member of the Terrorism Select Committee.

Schiff laments that the nation had a chance to move on after the January 6 attack but instead chose a different path.

"There was a real opportunity to reject everything that led up to January 6, but instead, Republican leadership has continued to defend it," he says.

"To say the least, that's disappointing. It indicates that the recovery process will take much longer than it should."

On a Saturday, the Capitol's beautiful grounds, which resemble a park and are a favorite spot for visitors to snap photos in front of the iconic dome, are typically empty of lawmakers and workers.

The Senate returns to session on Monday, while the House of Representatives does not meet until the Monday after the protest.

When the fence around the Capitol was first erected after the January attack, it drew a lot of criticism from individuals worried about the message being sent by shutting off a symbol of democracy in such a public location.

It is generally acknowledged as a necessary precaution.