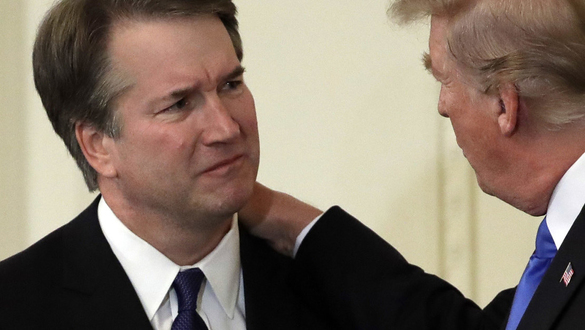 This bombshell accusation and revelation comes just a week before the Supreme Court nominee is set to receive a vote before the Senate Judiciary Committee.

Supreme Court nominee Brett Kavanaugh is being accused by an alleged victim of attempting to rape her at a party they both attended in high school. Judge Kavanaugh denied the allegation in a statement to The New Yorker, which broke the details of the encounter...

“I categorically and unequivocally deny this allegation …I did not do this back in high school or at any time.”

After Kavanaugh was nominated by President Trump, the woman, whose identity is still not public, sent Rep. Anna Eshoo (D-Calif.) and Sen. Dianne Feinstein (D-Calif.) a letter in the summer claiming Kavanaugh attempted to rape her.

The New Yorker has gone on record with the allegation:

“The allegation dates back to the early nineteen-eighties, when Kavanaugh was a high-school student at Georgetown Preparatory School, in Bethesda, Maryland, and the woman attended a nearby high school. In the letter, the woman alleged that, during an encounter at a party, Kavanaugh held her down, and that he attempted to force himself on her.

“She claimed in the letter that Kavanaugh and a classmate of his, both of whom had been drinking, turned up music that was playing in the room to conceal the sound of her protests, and that Kavanaugh covered her mouth with his hand. She was able to free herself. Although the alleged incident took place decades ago and the three individuals involved were minors, the woman said that the memory had been a source of ongoing distress for her and that she had sought psychological treatment as a result.”

The allegation and existence of this accusatory letter and sexual misconduct allegations have been swirling for weeks on Capitol Hill, with reporters and other Democratic senators pressing Feinstein, the ranking member of the Judiciary Committee, to share the information.

Sens. Susan Collins (R-Maine) and Lisa Murkowski (R-Alaska), who are considered possible “no” votes against Kavanaugh, did not immediately return requests for comments.

·        Sen. John Cornyn (R-Texas) retweeted someone who was mocking it as a game of telephone.

·        Charles Grassley (R-Iowa), the chairman of the Senate Judiciary Committee, also released a letter Friday morning from 65 women who said they supported Kavanaugh.

·        The White House put out a statement on Thursday, calling the controversy an “11th-hour attempt to delay” Kavanaugh’s confirmation. The Judiciary Committee is scheduled to vote on Kavanaugh on Sept. 20.