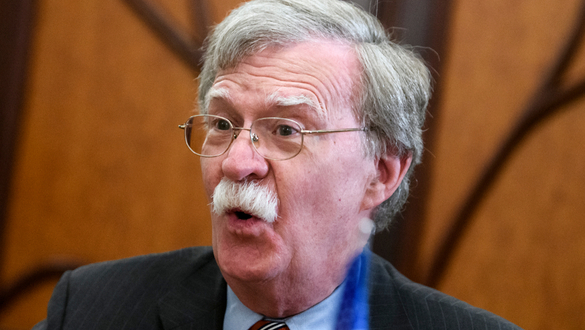 Former national security adviser John Bolton is refusing to appear voluntary to testify before House Intelligence Committee even though his lawyer sent a letter claiming that Bolton knows much more about the Ukrainian scandal and wants to be served a Congressional subpoena before he will testify.

During a private speech he gave to a private gathering last Wednesday at Morgan Stanley’s global investment to the firm’s event in Miami largest hedge fund clients Bolton insisted that his former boss’ President Trump, his daughter and son-in-law’s approach to U.S. policy on Turkey is motivated by personal and financial interests, according to several people who were present for the remarks according to NBC News.

According to six witnesses that were interviewed by NBC News, Bolton also took objection to President Trump’s application of his business acumen to his administration’s foreign policy, asserting the win-or-lose approach that drives real estate deals. Reportedly insisting just moving on to the next deal doesn’t work if you can’t force your will on the other party is dangerous.

Bolton painted a portrait of the president who fundamentally lacks an understanding of the interconnected nature of relationships required in foreign policy requires consistency.

Bolton’s speech in Miami overtly accused President Trump and his family of making every decision on foreign policy based on his and their potential personal financial gain. Bolton’s assertion of Trump’s policy of extortion and bribery is what House Intelligence Chairman Adam Schiff and his Democratic colleagues are alleging, i.e., as they move forward with public impeachment hearings.

President Trump attempt to extort the new President of Ukraine to conduct investigations into former Vice President Biden, his son Hunter and the possibility that former Secretary of State, Hillary Clinton’s email server which supposedly had the 33,000 emails on it has somehow wound up in Ukraine, and kept in hiding.

Multiple people who attended Bolton’s Morgan Stanley private speech in Miami while Bolton did not mention Ukraine he did emphatically make clear his concerns over the President and his family members’ decision-making centered on their self-interest. Bolton insisted his concern over their conflict on interests motivated him to keep a resignation letter in his desk for three months before his contentious departure Bolton also insisted he was the one who quit; Trump didn’t fire him.

So with all this and supposedly more, why isn’t Bolton no voluntarily stepping forward and doing his duty and testifying willingly to the House Intelligence Committee either behind closed doors or publically.

It’s only fair to ask Bolton if he is also solely focused on his financial self-interest at the cost of our country. Is he looking to promote a multi seven-figure speaking tour and promotional tour for his upcoming book? Is he a patriot or a promoter?

Through his speech and his lawyer’s letter to the House Intelligence Committee, Bolton has presented himself as critical linchpin witness in the inquiry into Trump’s effort to extort the Ukrainian government to investigate Vice President Joe Biden and his son Biden.

If Bolton is a firsthand witness, his testimony is required for his claim to be a true patriot.  Especially since current sworn testimony about Bolton’s strong opposition to the extortion of Ukraine that culminated in Trump’s acting chief of Staff ordering the withholding of military aid and a presidential meeting until the Ukrainian government publicly succumbed to President Trump’s extortion is already on the on record.