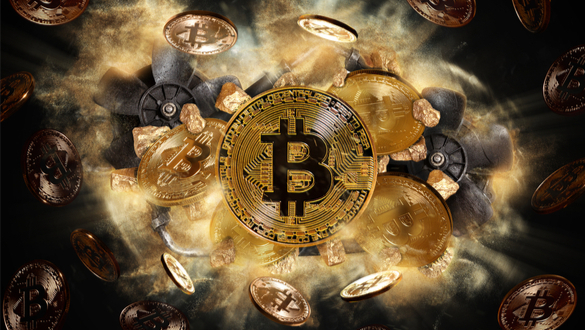 Bryce Paul, the host of the #1 Crypto Podcast with over 9 million plays on Apple, Spotify, and Google, releases his:

5 Step Plan for Getting In Early on

Watch this FREE presentation to discover:

How the "Great Reset" will give rise to a parallel economy estimated to be $2.2 quadrillion in size (and how YOU can get in today)

How a series of recommendations already produced gains of 38,388% (and why the next wave could be even bigger)

How to profit from potentially explosive 10,000%+ opportunities in the digital lending, gaming, and metaverse markets

Get Your 5-Step Plan Now

At one point, Bitcoin was down around $10.

Now…a new opportunity is emerging in the crypto market.

One that only happens when the market is down.

Insiders believe this is bigger and even better than Bitcoin.

And about 48x larger than the entire stock market…

With the promise to take over the $400-trillion global financial marketplace.

I'm calling it "Bitcoin 2.0, "... and… as usual… it's the investors who get in while the market is down who will claim the lion's share of the spoils.

How to profit from potentially explosive 10,000%+ opportunities in the digital lending, gaming, and metaverse markets... And much more

I confess to an avid interest in internet investment promotions. They harbor useful information. The marketing departments of investment publications, including "Crypto Revolution," for example, are uncommonly sensitive and astute in identifying themes that resonate with investors.

Typically, I view particular promotions with a grain of salt. Some copywriters would say almost anything to get a few more click-throughs.

Many employ transparent gimmicks. Among my favorites are references to ridiculously specific returns on an always mysterious investment. Like this lead imploring you to follow the lead of "the Man Who Made 18,325% Crypto Profits." Really?

So while they may not be authoritative, and their reports of profit percentages may have originated in a dream, they do have value. Never doubt it. This shines through in meta-conclusions.

Where the nonsense becomes sublime is where a variety of copywriters employ a similar idea to capture your attention. Usually, when that happens, it tells you that the theme they are toying with resonates with investors.

In other words, you can gain accurate information from the subject lines in your inbox. I do.

Like a pornographer who is always captivated by naked pictures of stunning ladies, I am an investment junkie who is fascinated by the relevant topics that keep piling up in my inbox.

For instance, I browsed through the first 50 emails that were received in my mailbox earlier today out of simple curiosity. The results of my hasty survey indicated that in the first 50 items, there was a hint or reference to 36 different investment-related topics. However, there were a few notable exceptions. Along with the other topics, Father Hugh Duffy, Ph.D. gave me a meditation on how to pray, which I found very helpful. It was probably something I needed.

And some of the investment themes, how shall I put this, a touch out of left field.

In the event that I might have proven insufficiently baffled by the rules of the U.S. income tax, I received a surprising briefing on changes in regulations governing the income tax in India. (The Internet knows no borders):

"From today, the late fee for PAN-Aadhaar seeding has been increased from Rs 500 to Rs 1,000." (An Indian Rupee is worth about one and one-third US cent. So the fines for late PAN-Aadhaar seeding amount to $6.50 and $13.00). But pray you never have to pay them.

In addition, a one percent tax deduction at source (TDS) on all cryptocurrency transactions from Q2FY23 will be applicable today. Meanwhile, from today 10 percent TDS on monetary benefits received through sales promotion on social media influencers and doctors has also come into effect."

One of which, of course, involves the late fee for "PAN-Aadhaar seeding," whatever that might be — something to do with reporting Indian tax ID numbers, I think). The other puzzle that may keep me awake tonight is how the one percent tax deduction on all of next year's cryptocurrency transactions would work?

Puzzling though it is, the fact that India's new "one percent tax deduction on all cryptocurrency transactions from Q2FY23 will be applicable from Today" warms my heart.

After some thought, I came to the realization that Indian taxpayers might be required to pay taxes in advance. As bad as the U.S. income tax is, it could be worse. However, let's get back to actionable investment insight.

Lately, I have noticed many promotional emails focused on Bitcoin and cryptocurrency. This arrested my attention. One factor that stands out is that at least half of the promotions that tease you with mentions of Bitcoin are not about it at all.

They are touting some unknown crypto that you are invited to imagine could grow to be as big as Bitcoin; aka "Bitcoin 2.0," There are many competitors in this race, but rather than parse them; I will take a free ride on my friend Peter Thiel's considerable insights, namely his instructions to his portfolio managers to put his bet on Bitcoin and not to invest in Bitcoin "wannabes."

Decals in the windows of gas stations advertise "Bitcoin sold here." They don't say, "UFO crypto’s sold here." Of all the cryptocurrency, Bitcoin has the embedded institutional support to survive.

That implies to me, as Peter Thiel suggests, after acknowledging that the future of cryptocurrency is precarious and difficult to predict, Bitcoin is “always the most honest market in the world” and “the most efficient.”  My inbox tells me that Bitcoin will rise again. This may be the time to buy more of it.

For astute financial guidance and more editorial insight check out my newsletter and get more of the forecasts judged 'impossible' when they were initially made in Strategic Investment.