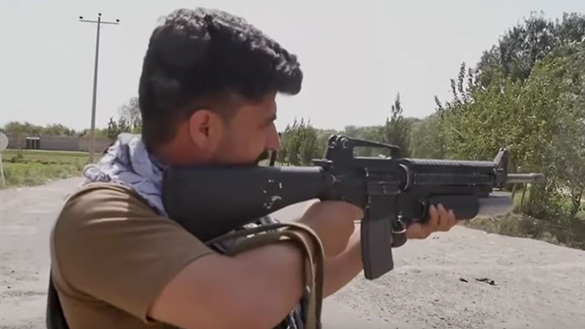 The Taliban now have billions of dollars worth of U.S. weaponry after the Afghan security forces trained to handle the military equipment collapsed.

Following the rapid disintegration of Afghan security personnel trained to handle the military equipment, the Taliban have gained control of billions of dollars worth of American weaponry and ammunition.

In addition to Black Hawk helicopters and A-29 Super Tucano attack planes, the Taliban has captured a number of weapons and equipment.

Taliban militants have also been using M4 carbines and M16 rifles manufactured by the United States rather than their traditional AK-47s.

Also seen are U.S. Humvees and mine-resistant ambush-protected vehicles, which the terrorists seem to have acquired.

While it is virtually impossible to operate advanced aircraft without extensive training, seizing the equipment provides a propaganda boost to the militants and serves as a reminder of the enormous amount of money that the United States military has wasted in Afghanistan over the last two decades.

"When an armed group gets their hands on American-made weaponry, it's a status symbol. It's a psychological win," said Deputy head of the Center for International Policy's Security Assistance Monitor, Elias Yousif.

According to him, "Clearly, this is an indictment of the U.S. security cooperation enterprise broadly."

This should cause a great deal of worry about the larger business every day, whether in the Middle East, Sub-Saharan Africa, or Eastern Asia.

According to estimates, the United States has spent an estimated $83 billion training and equipping Afghan security personnel during the past two decades.

According to a 2017 Government Accountability Office report, between 2003 and 2016, the United States transferred 75,898 vehicles, 599,690 weapons, 162,643 pieces of communications equipment, 208 aircraft, and 16,191 pieces of intelligence, surveillance, and reconnaissance equipment to Afghan forces.

According to a study released last year by the Special Inspector General for Afghanistan Reconstruction, the United States also provided Afghan troops with 7,035 machine guns, 4,702 Humvees, 20,040 hand grenades 2,520 explosives, and 1,394 grenade launchers, among other pieces of equipment (SIGAR).

As of June 30, Afghan forces had 211 aircraft provided by the United States in its inventory, according to a separate SIGAR study.

At least 46 of those planes are currently in Uzbekistan, after more than 500 Afghan soldiers took use of them to escape the country when the government in Kabul came crashing down last week.

Although it is unknown precisely how many weapons have slipped into the hands of the Taliban, the Biden administration has admitted that a "reasonable number" have done so in recent years.

Even as the United States troops withdrew from Afghanistan, the United States maintained a steady supply of aircraft to the Afghans, announcing plans to deploy 35 Black Hawk helicopters and three A-29s to the country in July.

"Those Black Hawks were not given to the Taliban. They were given to the Afghan National Security Forces to be able to defend themselves at the specific request of [Afghan] President [Ashraf] Ghani, who came to the Oval Office and asked for additional air capability, among other things." Sullivan said.  Sullivan continued, "So the president had a choice. He could not give it to them with the risk that it would fall into the Taliban's hands eventually, or he could give it to them with the hope that they could deploy it in service of defending their country," "Both of those options had risks. He had to choose. And he made a choice."

It was up to him whether he would provide it to them with the danger that it might ultimately fall into the hands of the Taliban or if he would offer it to them in the hope that they would use it to protect their nation, Sullivan said.

As Yousif of the Center for International Policy pointed out, even if the Taliban were to coerce former Afghan pilots into flying for them, the militants would not be able to keep the aircraft in the air for long, despite their "desire" to use some of the more advanced U.S. weapons, such as aircraft.

They may handle a flight or two and operate them in a minimal capacity in the near term. Still, they will not develop into a strong or effective military capability until they get long-term sustainment, maintenance, and service, among other things.

Yousif expressed immediate worry about the large number of small weapons that had been left behind. "They are easy to maintain, easy to learn how to use, easy to transport," he said. "The concern for all small arms is that they are durable goods and they can be transferred, sold. We've seen this before where a conflict ends and the arms that stay there make their way to all parts of the world."

On Wednesday, more than two dozen Republican Senators demanded a "full accounting" of U.S. military equipment provided to Afghan forces over the previous 12 months, as well as an accounting of what equipment has been seized by the Taliban and what plans are in place to either recapture or destroy the equipment.

According to them, it is "unconscionable" that high-tech military equipment purchased with public dollars and sent to the Taliban and their terrorist partners has slipped into the hands of terrorists.

According to the report, before announcing the departure from Afghanistan, the U.S. Department of Defense should have prioritized the security of its assets.

In a statement on Wednesday, Gen. Mark Milley, chairman of the Joint Chiefs of Staff, said the military's immediate emphasis is on evacuation operations and refused to comment on whether the equipment could be destroyed.

Milley, on the other hand, told reporters that "we clearly have skills."

"We don't obviously want to see our equipment in the hands of those who would act against our interest or the interest of the Afghan people and increase violence and insecurity inside Afghanistan," Kirby said in his own briefing. "There are numerous policy choices that can be made, up to and including destruction, and what I would tell you at this point is those decisions about the disposition of that level of equipment in Afghanistan haven't been made yet."

How Taliban militants have thousands of guns, vehicles, and more than 200 aircraft