Biden Will Renominate Powell for Fed Chair and Brainard for Vice Chair. 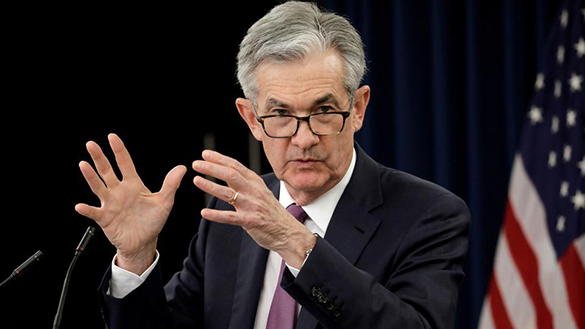 President Joe Biden will renominate Jerome Powell to be the next chairman of the Federal Reserve and will choose Lael Brainard to be the next vice-chairman.

Powell, a Republican, has served as chairman of the Federal Reserve board of governors since 2018 and has garnered support from members of both political parties.

Mindy Brainard, the lone Democratic member of the Federal Reserve Board of Governors, was the preferred pick of Powell's leftist opponents and the apparent frontrunner to replace him if President Biden declined to seek re-election.

Instead, she is on pace to succeed Fed Vice Chair Richard Clarida, who was chosen by Trump and is a Republican. Clarida's tenure as the bank's No. 2 ends in January, and she will take over for him.

Biden cited Powell and Brainard's roles in leading the Federal Reserve's response to the COVID-19 recession, as well as their shared focus on "keeping inflation low, prices stable, and delivering full employment," in a statement released on Monday. "Our economy will be stronger than it has ever been," Biden said.

"If we want to build on the economic success of this year, we need stability and independence at the Federal Reserve – and I have complete confidence in Chair Powell and Dr. Brainard after witnessing their trial by fire over the last 20 months that they will provide the strong leadership our country requires," Biden said.

The president had been debating whether to renominate Powell, who is generally supportive of the president's economic agenda but does not share it entirely or Brainard, a former member of the Clinton and Obama administrations who has advocated for the Federal Reserve to be more aggressive in dealing with financial risks.

Even though Powell and Brainard have opposing views on financial regulation and the Federal Reserve's involvement in climate change, both agree with President Biden on the importance of employment and inflation in the economy.

Each has prompted the Federal Reserve to place a greater emphasis on creating a solid employment market while increasing its tolerance for inflation.

Since Powell enjoys strong bipartisan support and holds an unusual stance as a Republican in favor of the looser monetary policy, he was widely expected to be renominated.

Even if Powell's record on banking regulation has lost him the support of certain progressive politicians, many liberal economic veterans pushed Vice President Biden to renominate Powell as the economy and the Federal Reserve faced critical challenges.

Powell's re-election was supported by Treasury Secretary Janet Yellen, who served as chair of the Federal Reserve from 2014 to 2018 and was a vocal supporter of Powell's nomination. "The steady leadership of Chair Powell and the Federal Reserve helped ensure that America's economy was able to recover from a once-in-a-generation health and economic crisis," she said.

As for Brainard's potential promotion, Yellen expressed "gratefulness" for the decision and described her as a "renowned economist" who "has been crucial in the nation's recovery."

Powell should have no difficulty securing a second term in the Senate, which is equally split.

A Republican-controlled Senate approved Powell by a vote of 84-13 in 2018, and the Fed head will need 50 votes to be confirmed once again.

Following Biden's declaration, Sen. Sherrod Brown (D-OH), chairman of the Senate Banking Committee, indicated that he would support Powell being re-elected for a second term in his statement.

The opportunity to collaborate with Powell on taking on Wall Street and standing up for workers to participate in the wealth they generate is exciting.

Sen. Pat Toomey (R-PA), the top Republican on the Banking Committee, has likewise said that he supports Powell despite his reservations about the Fed's handling of the inflationary situation.

Even though I strongly disagreed with Chairman Powell's decision to maintain the Fed's emergency accommodative monetary policy—long after the economic emergency had passed—Chairman Powell's recent comments provide me with confidence that he recognizes the risks of higher and more persistent inflation and is willing to act accordingly to control it." "Toomey shared his thoughts.

Brainard is also expected to be confirmed due to her strong relationships with Democratic members and their long-standing support. Still, she may get minimal help from Republicans in an increasingly split Senate.

I am looking forward to meeting with Governor Brainard to address these and other issues, even while I have reservations about some of the regulatory policies she would support as Vice Chair for Supervision. "Toomey stated this, indicating that he was open to supporting her.

Those who criticized Powell's monetary policy on the left said that his support for easing specific financial laws and his more measured approach to climate-related financial risk undermined any potential benefits that may be derived from it.

Under Powell's leadership, the Federal Reserve relaxed numerous important bank restrictions enacted as part of the 2010 Dodd-Frank Wall Street reform legislation, all of which were opposed by Brainard.

Additionally, the Federal Reserve has started to investigate the risks that climate change presents to the financial system and how institutions can account for those concerns. However, Powell has ruled out more drastic steps to shift money away from fossil fuels.

Several progressive lawmakers and climate activist organizations pushed Biden to replace Powell with a Federal Reserve chair to direct the bank's resources toward combating climate change. Still, they did not express support for Brainard explicitly.

Even though Brainard has vocally endorsed a climate stress testing system for banks, she has not expressly advocated for the Federal Reserve to punish banks that fund or finance carbon emissions. Her popularity among climate hawks is primarily due to her Democratic affiliation.