Biden Has To Take the Gloves Off With Trump 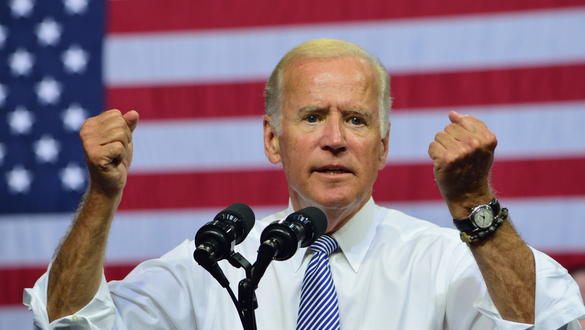 The former Vice President is trying to avoid a name-calling battle with Donald J. Trump when that’s the best way to make people aware of the conman Trump, and his swamp cabinet’s crimes, lies, corruption, and treason. This has to change.

Biden’s Iowa speeches were billed as being “a scathing takedown of President Trump.” Because the former Vice President’s down to earth basic decency, and his decades of integrity in the Senate -- he pulled his punches and was as a result unable to eviscerate the President and his criminal minions in the way they deserve.

Biden can’t afford to pull any punches, fail to tell the American people the truth about this corrupt president and his administration. Instead, Biden should be pulling out all the stops, and calling the president and his crooked sycophants out for what they are. Here are some 15 suggestions…

1.     Trump is individual #1 and an unindicted co-conspirator in one or more Federal Crimes connected to his making illegal campaign payoffs to cover up his sexual relationship Stormy Daniels, for which his personal lawyer and fixer Michael Cohen was sentenced and is already serving three years in Federal prison.

2.     Trump is a racist white supremacist sympathizer that has hoodwinked honest and well-meaning Christians into rejecting the teachings of Jesus Christ to love and aid their fellow human beings. His Charlottesville press conference was sinful and ignored the anti-Semitic chants that “Jews will not replace us.” Insisting he’s pro-Israel or that Ivanka Trump is a convert to of not being an anti-Semite.

3.     Trump is a master criminal conman who likely be handcuffed and dragged off by U.S. Marshals to an arraignment in New York City minutes after January 2020 inauguration. Assuming, of course, he hasn’t run to Russia, Saudi Arabia, and North Korea for sanctuary from extradition like Snowden has been forced to do.

4.     Biden should be pledging to return ethics, honesty, and integrity to the Presidency by issuing an executive order within hours of being sworn in as our 46th President to rescinding U.S. Justice Department policy that makes indicting a sitting President for crimes to make sure no one is above the law.

5.     President Trump is desperate to hide his tax returns, business records, and he and his businesses are under investigation by New York State for tax evasion, bank fraud, money laundering. Biden should be hammering the truth in that President Trump has been a resource for the Russian Mob, possibly for four decades. Trump is a criminal who has a treasonous relationship with a long list of Russian and other crime organizations. Biden should be pledging during his speeches to make sure the U.S. Justice Department thoroughly investigates Donald J. Trump, Donald Trump Jr., Jared Kushner, Ivanka Trump and Eric Trump for tax fraud, graft, and influence peddling while in office.

6.     Biden should be calling the Trump Cabinet the ultimate swamp Cabinet and Mitch McConnell and Secretary Elaine Chao out as criminals that are at every opportunity looting American taxpayers. They are cashing in on their offices, violating ethics rules over and over again for their self-enrichment. Biden should be promising to appoint a Special Prosecutor to hold all them and the rest of the criminals in Trump administration, those who left under clouds of graft accountable, and to bring them to justice.

8.     Trump is the “Do Nothing President” who has made it clear to Speaker Pelosi and Chuck Schumer he will not work on any legislation including healthcare, infrastructure, or anything else unless Congress stops all of its oversight efforts. Claims he can’t make any deals with Speaker Pelosi are nonsense. He’s the one stonewalling the American people.

9.     Trump is a want to be dictator; his GOP sycophants are willing to backstab every one of our allies to empower dictators around the globe who commit heinous crimes against humanity. Kim Jung Un tortures, starves and hangs children in North Korea.

10.  Trump and his Attorney General William Barr and Commerce Wilber Ross are the gerrymanders in chief and are attempting to subvert our democracy via a criminal conspiracy to manipulate the 2020 census to deprive equal and fair representation during the next decade. The papers Trump is claiming executive privilege on would prove what we now know. The Trump administration lied to Federal Courts over and over.

11.  Trump is a North Korean stooge. His willingness to side with North Korea’s dictator against the CIA and ties the hands of all of our intelligence agencies could lead to the deaths of millions of South Koreans Japanese, Philippines, Australians, and U.S. Citizens.

12.  Trump is Putin’s Stooge; in Helsinki, Putin freely admitted he wanted Trump elected. He encouraged help from and took advice from the Russians to get elected in 2016.

13.  Trump is a Saudi stooge who is in the pocket of this evil Saudi Prince and his regime.

14.  The President calls Biden sleepy, yet it is Trump that is showing signs of mental decline, while he has become “Dementia Don.” His inability to being coherent is evidenced almost every time he speaks. Trump only does press interviews with right-wing friendly reporters and rambles from one lie to another.

15.  Trump is a pathological liar that is doing everything he can through the court to kill the ACA and strip American’s with pre-existing conditions of their health care and will cut Medicare and Medicare to pay for his tax cuts to corporations and the richest .5 % of Americans.

I could go on and on. Biden’s speechwriters have an abundance of material facts to work with. My point is the Vice President should be in full attack mode during every speech and should follow his sharp attacks with an outline of his agenda for his Presidency…

·        Adding millions of jobs to the U.S. economy with constructive policies.

·        Restoring credibility among our allies.

·        Protecting our elections from foreign hacking and influence.

·        Ending the $1 Trillion a year tax cuts to the super rich and cutting the taxes of the middle class and poor. Wealth doesn’t drip down; building a stronger middle class will bring wealth to everyone.

·        Deliver on accepting Dreamers and others deserving U.S. citizenship.

·        Accelerating clean energy alternatives and bolstering accelerating technologies in science, medicine, agriculture, and space that will change the world and help bring about a world of peace and abundance that could bring a golden age. Amazing leaps in AI and computers are within our grasp.

·        Ending the supply of weapons to the Saudi’s that are being used to kill and starve Yemeni women and children.

·        Restoring the independence of the Justice Department, FBI.

·        Biden should remind Americans at every campaign stop that he and Obama deported 2 million undocumented people a year without cutting off labor that our farmers.

Once the Criminals in the White House and in Washington including are evicted, Biden should promise to make every effort to reach across the aisle on as many issues possible.