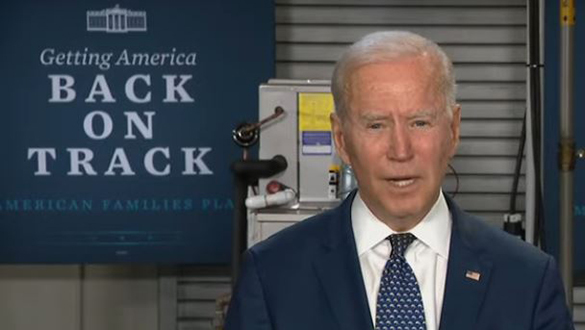 Biden defended the tax increase as required during Monday's address; it all begins with access to a high-quality education.

President Biden on Monday encouraged businesses and affluent Americans to pay their fair share to support community college and other programs aimed at workers.

Biden challenged the nation's wealthiest individuals and businesses to pay their fair share of taxes to support his wide-ranging worker and safety net initiatives.

Biden said that the United States could have two free years of college if it raised taxes to their 2001 level.

"The choice is about who the economy serves. And so I plan on giving tax breaks to the working-class folks and making everybody pay their fair share."

“It doesn’t add a single penny to our deficit, it’s paid for by making sure corporate America and the wealthiest 1 percent … just pay their fair share. I come from the corporate capital of the world. More corporations are incorporated in the state of Delaware [than] all the rest of the nation combined. And I’m not anti-corporate, but it’s about time they start paying their fair share.”

The school visits are part of a tour to promote Biden's $2.3 trillion initiative to repair highways, broadband, and other facilities, as well as a $1 trillion social spending package over the next decade that includes $1 trillion in education and childcare spending and $800 billion in tax incentives for middle- and low-income families.

Together, the two plans would amount to the largest domestic spending effort since the 1960s, funded by increased taxes on businesses and the rich.

At the low cost to middle-class and upper-class incomes, it would greatly extend America's 13-year-old free education program, incorporating an additional 2-year preschool program for those with a two-year college component for those who have finished high school.

Together, the two initiatives would amount to the largest domestic spending effort since the 1960s, financed by increased taxation on businesses and affluent Americans.

"It is paid for by making sure corporate America and the wealthiest 1% pay their fair share."

Biden and other proponents believe that community colleges are an inexpensive, open means to launching students into different career paths that allow for advancement from nursing to highly technical manufacturing jobs. It is a platform to start various types of careers, including those in nursing, as well as those in manufacturing and mechanical engineering.

The American Association of Community Colleges estimates that roughly Eleven million students were enrolled in community colleges in 2019.  Tuition averaged $3,770 a year, or about one-third the cost of a four-year public college.

As a pledge, Biden has said he would collaborate with both Democrats and Republicans to resolve the issue, but they have been unable to come to an agreement.

Although almost everyone agrees that tax rates on the rich is a good idea, it was no surprise that no Republicans voted for the $1.9 trillion federal tax cut package. But it's still a good idea, if only someone eles woyuld pay for it.

Biden Speaks During White House's Getting America Back On Track Tour