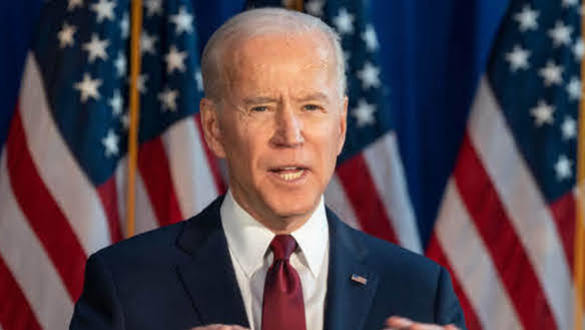 Despite his efforts to specify its bounds, President Biden signed a modern-day Lend-Lease Act on Monday, 81 years after the original version helped pave the way for World War II.

Lend-Lease Act of 1941: On March 11, 1941, President Roosevelt signed the Lend-Lease Act. In it, he was given the power "to dispose of any defense article" to "any such government" whose defense the President deemed "vital to the United States' defense."

Recently, the United States has grown increasingly involved in the Ukrainian war, as recent events have demonstrated. In addition to the new lending program, which will waive time-consuming requirements to expedite the delivery of arms to Ukraine, President Biden has proposed an additional $33 billion in military and humanitarian aid, a package that congressional Democrats intend to increase another $7 billion. He arranged for the first lady to make a secret trip to the combat zone. In addition, he provided intelligence that assisted Ukraine in assassinating a dozen generals and linking Russia's flagship.

However, even after two and a half months, President Joe Biden is still concerned about appearing as if the United States is engaged in the proxy war that Russian President Vladimir V. Putin claims to be waging. Even though Mr. Biden publicly sent aid and signed the lend-lease agreement on camera, Mr. Biden was enraged by leaks about American intelligence assistance to Ukraine that resulted in the deaths of Russian generals and the sinking of the cruiser Moskva, out of concern that it would provoke Mr. Putin into the escalation that Mr. Biden has worked so hard to avoid.

"The administration has been trying to strike this constant balancing act between supporting Ukraine and ensuring that it can defend itself militarily while also being very concerned about escalation," said Alina Polyakova, President of the Center for European Policy Analysis Russia policy expert.

"This kind of hand-wringing is becoming increasingly intolerable," she added. "It's probably more effective to say this is our strategy, and we'll deal with and manage any potential escalating that we see from Moscow."

The administration shipped increasingly advanced military supplies and publicly voiced its desire to assist the Ukrainians and beat and even enfeeble Russia. However, the administration's stance has altered in recent weeks. In the wake of a two-week visit to the war-torn Ukrainian capital of Kyiv, Mr. Austin stated that "we want to see Russia weakened to the point that it is unable to do the kinds of things" that it has done in the country in the past. During her own subsequent visit to Kyiv, Speaker Nancy Pelosi stated that the United States "will stand with Ukraine until victory is achieved."

According to several seasoned government officials, Mr. Biden was correct to be careful about blatantly poking Mr. Putin since the ramifications of escalation with a nuclear-armed Russia are much too devastating to take any chances with them.

According to Michael A. McFaul, a former ambassador to Russia who is now a professor at Stanford University, there is a distinction between clandestinely assisting Ukrainian forces in their attacks against Russian soldiers and flaunting it. Yes, Putin is aware that we are sending intelligence to Ukraine, he confirmed. "However, stating it aloud contributes to his public narrative that Russia is battling not just the Ukrainians but also the United States and NATO in Ukraine. We don't want to be seen doing something like that."

However, some critics said that the administration had been overly cautious in allowing Russia to determine the terms of the conflict—or rather, Washington had made too many educated guesses about what would trigger a Russian military response. According to Frederick W. Kagan, a military scholar at the American Enterprise Institute, "Are we discussing red lines with ourselves?" 'Because I'm inclined to believe that we are.' because no one in Washington is genuinely sure where the boundary is that should not be crossed when dealing with Mr. Putin; instead of making specific decisions, the United States has relied on educated guesswork.

Several historical parallels and reversals may be found in the legislation that President Biden signed on Monday. During World War II, President Franklin D. Roosevelt signed the Lend-Lease Act, which was initially intended to assist the British in fending off Nazi aggressors. It was eventually expanded to help other allies, including the Soviet Union.

Since the modern-day equivalent of the Arms Export Control Act (the Ukraine Democracy Defense Lend-Lease Act) will funnel weapons and equipment to Russian soldiers and those opposing them, Moscow will be on the other side of the arms channel.

Mr. Biden remarked in the Oval Office as he signed the bill, "Every day, Ukrainians pay with their lives." "And the crimes committed by the Russians are unfathomable." And if fighting is expensive, giving in to hostility is far more so. That's why we're still here."

Mr. Biden signed the bill on Victory Day, the 77th anniversary of the Allies' victory over Nazi Germany, which was made possible by the original Lend-Lease Act.

The White House press secretary said, "This day is intended to honor peace and unity in Europe and the defeat of Nazis in World War II." "Instead, Putin is perverting history, or rather, seeking to rewrite history, to excuse his unlawful and unjustified war."

The financing scheme was announced when congressional Democrats were moving fast to evaluate the $33 billion relief package presented by President Biden. They suggested that they would significantly enhance it. According to two people familiar with the proposal who previewed it anonymously, while Republicans pushed for increased military expenditure, Democrats insisted on an equal increase in humanitarian relief, putting the total price tag to $39.8 billion.

One of the people who spoke with Mr. Biden said that Ms. Pelosi and Senator Chuck Schumer of New York, the Democratic majority leader, talked by phone with him on Monday as they worked to finalize the parameters of the proposal. House leaders want to bring the bill up for a vote as soon as Tuesday.

Even though the parties are sharply divided on domestic expenditure, the increase demonstrates a startling unanimity in both parties to pour large sums of money into the struggle against Russia. In March, Congress approved $13.6 billion in emergency help for Ukraine, and President Joe Biden has warned that if no new legislation is passed, the funds may run out soon.

However, it was unclear whether Republicans, whose backing would be required in the Senate, had reached an agreement on the proposal's contents.