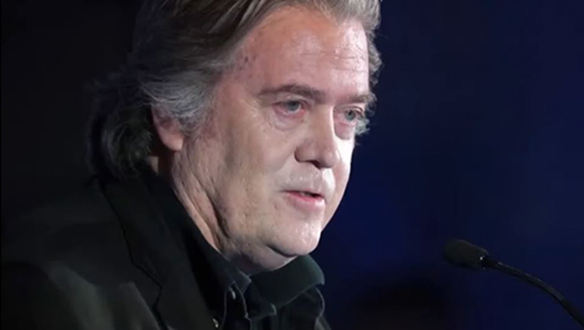 Steve Bannon, a staunch supporter of President Donald Trump, may face prison time if the House of Representatives proceeds with criminal contempt proceedings.

At the committee hearing, Rep. Liz Cheney (R-WY ), the committee's vice-chair, said that "based on the committee's research, it seems that Mr. Bannon had significant prior knowledge of the plans for January 6 and presumably had a major part in developing those plans."

On January 6, Mr. Bannon was in the war room at the Willard.

His awareness of the president's attempts to sell millions of Americans on the scam that the election was stolen seems to be extensive as well," she said.

The entire House will vote on the issue on Thursday, relegating the decision on whether to bring charges against Bannon to the Justice Department, which may result in a fine, prison time, or both for the former White House staffer.

Rep. Bennie Thompson (D-MS ), the chair of the special panel, questioned on Tuesday why Bannon would be considered a "martyr" for Trump, who fired him after only a few months at the White House but ultimately pardoned the former aide on his final day in office as Bannon faced charges related to fundraising for Trump's border wall. Bannon was charged with conspiracy to obstruct justice and obstruction of justice and was sentenced to prison.

Their tense relationship seems to have improved in the weeks leading up to the protest on January 6, as Bannon met with rally organizers and promoted the gathering on his podcast.

This is not going to happen in the way you want it to happen...."

To which I can only respond, "buckle up."

"You were instrumental in making this happen, and tomorrow is game day, so buckle up," Bannon urged the audience.

According to House Intelligence Committee Chairman Adam Schiff (D-CA), one of nine members on the January 6 committee, "his testimony is important because he was predicting that all hell was going to break loose on January 6, and he was reportedly in communication with the president in the weeks leading up to the 6th, in multiple communications with the White House leading up to that day."

"The president's involvement before, during, and after the presidential election on January 6 is, I believe, the most significant unknown about the day, and we're determined to find out."

On Monday, the committee published the entire text of Bannon's subpoena, which requested him to provide information about any role Trump had in the organization of the event on January 6, as well as any discussions he had with anybody else at the White House regarding Trump's comments at the rally.

As part of the investigation, the committee inquires as to whether Bannon had any contact with Kash Patel, the chief of staff to acting Defense Secretary Christopher Miller, or Rep. Scott Perry (R-PA), a staunch Trump supporter who has emerged as a key figure in Trump's pressure campaign against Attorney General Jeff Sessions in the waning days of his presidency.

In recent weeks, the committee's attention had shifted to a rally at which Trump spoke just before his supporters stormed the Capitol, a focus that has become more prominent.

Eleven of the key organizers of Women for America First, which planned the event on the Ellipse where Trump spoke and urged supporters to "fight like hell," were subpoenaed by the panel for questioning.

Katrina Pierson, Trump's former campaign spokesperson, is among others who have joined the organization.

The committee also subpoenaed a right-wing agitator and "Stop the Steal" organizer named Ali Alexander. According to the committee, Alexander had obtained a permit for the Capitol grounds and had instructed participants of an earlier protest to march to that location after the event ended. Bannon's remarks made the day before the event is now being scrutinized much more closely than previously.

Rep. Jaime Raskin (D-MD) said after the vote that Bannon had said "all hell is going to break loose" the day before the riots and insurrection took place and warned, or advertised essentially, that this was going to be an absolute game-changer in American politics, urging everyone to watch to participate in it.

In other words, he possesses evidence regarding what happened. Since he has been subpoenaed, that evidence must be turned over to the United States Congress.

According to a lawyer representing Bannon, the committee's subpoena would not be honored until the courts addressed Trump's claims to executive privilege, which sought to prevent documents and witness testimony from being disclosed to the committee.

However, committee members argue that such arguments lack validity since executive privilege has only been used by serving presidents in the past.

As a result, Bannon's short tenure in the White House came to an end far earlier than the period under consideration by the committee and is limited to his activities as a private person.

"Donald Trump did not even employ Steve Bannon at the time; the president had dismissed him in August of 2017."

"He wasn't even an employee of the government, so he's on the same level as everyone else in this room," Raskin said of the man.

The information he has concerning this aggressive attack on Congress, this effort to overturn the 2020 presidential election, is similar to that of anybody who has been subpoenaed to bring in evidence about anything.

His claim to executive privilege is completely and utterly without merit."

Executive privilege rights to a trove of documents requested by the committee, which covered a wide range of Trump White House matters, had already been waived by President Biden. The committee had sought any documents or communication in any way related to the president's wife, adult children, and nearly all of his top aides and advisers.

On the other hand, Cheney believes that Trump's executive privilege battle is important in and of itself.

"One thing seems to emerge from Mr. Bannon's and Mr. Trump's privilege claims, though," the Wyoming Republican said during the hearing.

Some have suggested that President Trump directly participated in the planning and executing the events on January 6.

Those are the kinds of things we'll look at."

January 6th Committee Prepares To Drop The Hammer On Bannon