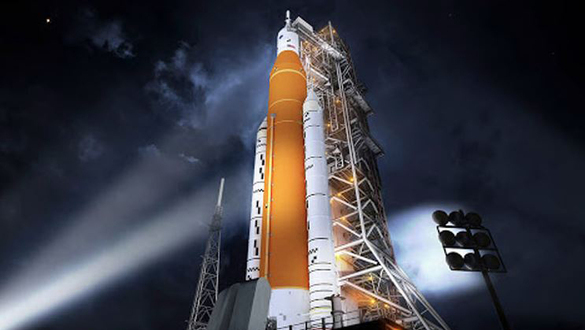 This month commemorates the half-century anniversary of the last time astronauts from NASA landed on the lunar surface. The space agency has great expectations that the first successful launch of the brand-new Artemis program would be the precursor to sending humans to Mars.

The Orion spacecraft, the Space Launch System (SLS) rocket, and the ground systems at the Kennedy Space Center in Cape Canaveral, Florida, will all participate in the first integrated flight test of NASA’s deep space exploration system, which is called Artemis I. Artemis I will be an uncrewed flight that will provide a foundation for human deep space exploration, as well as demonstrate both NASA’s commitment and capability to extend human existence to the Moon and beyond. It is intended to test the rocket as well as the Orion crew capsule, where astronauts will ride. After the launch, the Orion capsule will head to the Moon, spending a couple of weeks in lunar orbit before returning to Earth for a splashdown in the Pacific in December.

This mission will be the first of a series of future missions that will, as time progresses, get progressively more difficult. During this flight, an unmanned Orion spacecraft will go hundreds of miles beyond the Moon on the most powerful rocket in the world. In the whole history of NASA, this will be the farthest any spacecraft that was built specifically for humans has ever traveled. The trip is estimated to take around three weeks in total.

Artemis’ mission intends to launch the Orion spacecraft into lunar orbits as far as 280,000 miles beyond Earth, which is 40,000 miles beyond the Moon and a record for human-rated spacecraft. Orion will also shatter records for its re-entry, which will occur at a speed of 24,500 miles per hour and generate temperatures of 5,000 degrees Fahrenheit before plunging into the Pacific Ocean.

If it launches on Wednesday as planned, it will return to Earth after 26 days and land on December 11. There is a backup launch window on Saturday for two hours that begins at 1:45 a.m., and there are other possible launch days between November 22 and November 27.

On November 4, at the time the rocket costing NASA $4.1 billion was moved to the launch pad, Nicole was only a disturbance in the Atlantic Ocean with no name, and meteorologists did not anticipate that it would develop into a storm that would eventually become a hurricane. As soon as it did, NASA administrators understood that they did not have the time to bring the rocket back inside in a secure manner, so they made the decision to leave it outdoors instead.

At the launch pad, a wind gust of 100 miles per hour was measured during the storm; however, this reading was taken at the top of one of the lightning towers, which is higher than the rocket. According to NASA, the vehicle’s design parameters were not surpassed by the gusts that were experienced closer to the ground.

Despite the fact that the insulation on the Orion capsule had suffered some minor, aesthetic damage, NASA officials told the press that the rocket was ready to take off.

That sparked some criticisms of the decision to leave Artemis I at the pad instead of retreating to the shelter of the Vehicle Assembly Building, but Jim Free, the associate administrator for NASA’s Exploration Systems Development Mission Directorate, explained on November 11 that trying to move the rocket in the rising winds as Nicole approached would have put even more strain on its structure than sitting still at the launch pad.

“If we didn’t design it to be out there in harsh weather, we picked the wrong launch spot,” Free said in a news conference on Friday after the storm had passed.

Tomorrow morning, just a week after Nicole’s turbulence, the rocket could launch for the Moon. If everything goes according to plan, NASA will finally overcome a series of technical issues and weather disruptions that have delayed the Space Launch System’s debut, as well as the start of the long trip to return people to the Moon.

Since then, NASA has completed a successful test of the SLS fuelling process after modifications to many critical fueling components. NASA seemed poised for a third attempt in late September, but Hurricane Ian forced a reversion of SLS to inside protection, so the test was postponed.

Following inspections, it was discovered that there was some little damage, including some to a strip of caulk from the Orion crew capsule that sits atop the rocket. On Monday, the engineers concluded their investigation, which revealed that the absence of the ten feet of caulk that had been added to smooth the flow of air before liftoff would not result in any issues.

Due to the complexity of performing diagnostic testing, it will not be known until the countdown begins whether or not NASA engineers have s been successful in resolving all of the technical issues that prevented the launch attempts in August and September. The hydrogen leak that prevented the countdown on September 3 could not be reliably traced back to a specific source by the engineers who investigated the incident. However, they attempted to address all of the concerns that may arise.

The management at NASA is quite confident that the mission will not get underway until all of the essential preparations have been completed, and they have expressed this certainty on several occasions.

On the other hand, in contrast to a brand new rocket, this one has been in service for quite some time. It has been more than a year since the stages of the rocket were stacked into the position where they would be ready to launch. Rockets are seldom maintained in this vertical position for any appreciable length of time. It is conceivable for the fuel in the two solid rocket boosters that are coupled to the core booster to begin to settle, which may have an influence on the way that the fuel is burned.

Next month, the certification that has been in effect for the two side boosters since they were constructed in March 2021 will no longer be valid. That does not necessarily imply that they will no longer function, but it does indicate that engineers will need to reevaluate the data they have. Multiple extensions of the certification have previously been granted by NASA.

This month commemorates the 50th anniversary of the final lunar landing by NASA astronauts. As early as 2025, the space agency hopes to commemorate the milestone with the first launch of the new Artemis II mission, a multiphase endeavor to restore people to the lunar surface.

Moon landings have once again become a top priority for NASA, which is one of the reasons why the space agency is allocating billions of dollars to this endeavor.

NASA’s official statement on the matter is as follows:

“We’re going back to the Moon for scientific discovery, economic benefits, and inspiration for a new generation of explorers: the Artemis Generation. While maintaining American leadership in exploration, we will build a global alliance and explore deep space for the benefit of all.”

NASA will make history by sending a woman and a person of color to the Moon as part of its Artemis missions. These missions will also make use of cutting-edge technology to investigate an unprecedented amount of the lunar surface. Together with our international and commercial partners, we will build the first presence on the Moon that will be there for an extended period of time. After that, we will put everything we have learned about the Moon and its surrounding area to use in order to take the next great step, which is going to be sending the first humans to Mars.

The United States National Aeronautics and Space Administration (NASA) has said that it is dedicated to achieving a number of additional first milestones as part of the series of Artemis missions. One of them is the extension of human exploration farther into the solar system. In spite of the fact that going back to the Moon seems like a case of “been there, done that,” NASA maintains that it is dedicated to achieving the aforementioned objectives.

The Artemis I mission management team gathered together on Sunday evening to review the current level of launch preparations and gave the “go” signal to go on with an attempt to launch on November 16.

The countdown, which began at 1:54 a.m. on Monday, is going off without a snag. Every component of the rocket and spacecraft is receiving power. Throughout the night, the crews will charge the flight batteries, do the last walkdowns at the launch pad, and test Orion’s communications.

Meteorologists with the United States Space Force Space Launch Delta 45 predicted on Monday, November 14, that the weather would remain 90% favorable for the launch of Artemis I.

The countdown, which began at 1:54 a.m. on Monday, is going off without a snag. Every component of the rocket and spacecraft is receiving power. Throughout the night, the crews will charge the flight batteries, do the last walkdowns at the launch pad, and test Orion’s communications.

Meteorologists with the United States Space Force Space Launch Delta 45 predicted on Monday, November 14, that the weather would remain 90% favorable for the launch of Artemis I.

The launch crew at Kennedy Space Center and supporting teams around the nation will begin the launch countdown roughly two days before the Artemis I mission launches on its trip around the Moon. The launch timetable has been revised in light of the lessons learned during the wet dress rehearsal testing.

The following is a list of some of the significant occurrences that take place after the L-15 minute mark:

Inside the terminal countdown, teams have a few options to hold the count if needed.