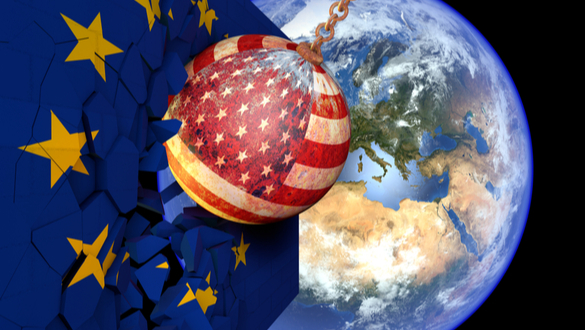 The World Trade Organization has decided the United States can impose $7.5 billion in tariffs (import taxes) yearly on European imports into the United States because of illegal financial support to Airbus SE. This is the biggest punitive award ever made by the WTO shattering the previous highest award of $4.04 billion set in 2002.

Despite President Trump’s contempt for the World Trade Organization (WTO), numerous threats to withdraw the United States from the organization claiming the WTO doesn’t ever side with the United States. The U.S. won a major victory that will allow the Trump administration to impose tariffs on $7.5 billion worth of European Union exports yearly. 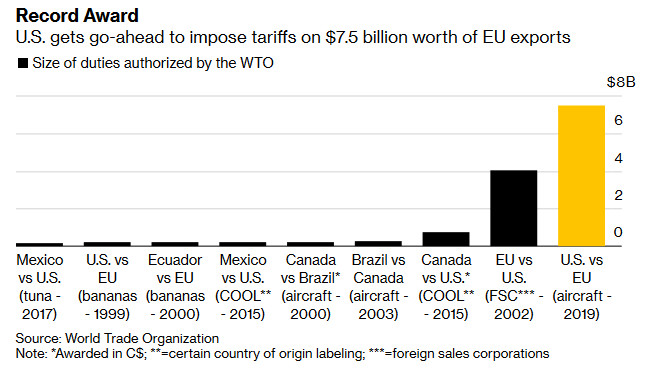 The ruling by the WTO ends the longest-running dispute between the United States and the European Union and comes at a time where both transatlantic relations have dramatically deteriorated thanks to Trump’s “America First” policies and at a time that the Trump administration’s trade wars with China and other trading partners are set off a worldwide economic slowdown.

The $7.5 billion in new tariffs comes with a warning from the WTO which cut its trade growth forecast for 2019 to the weakest level in a decade with the warning against a “destructive cycle of recrimination”, intended to dissuade the EU from imposing its own tariffs to offset the $7.5 that will be imposed by the Trump administration,

The Trump administration is likely to impose tariffs on …

The new tariffs will be authorized officially by the WTO in Geneva later this month.

Trump’s trade hawks are weighing an especially dangerous strategy of  “carousel” retaliation, which would regularly shift its tariff targets among other EU imported goods. The carousel would increase the number of tariffed products and the negative impact on a wider range of European businesses.

One of the biggest dangers is the European Union will jack up its own tariffs when the WTO rules early next year when it's expected the EU will find in favor of the EU on a complaint it filed over U.S. subsidies to Boeing Co.

“The mutual imposition of countermeasures, however, would only inflict damage on businesses and citizens on both sides of the Atlantic, and harm global trade and the broader aviation industry at a sensitive time,… the EU is ready to work with the U.S. on a “fair and balanced solution for our respective aircraft industries.”

Airbus, for its part, expressed a concern that the $7.5 in tariffs on its aircraft and components could hurt the U.S. aerospace industry because 40% of its procurement comes from U.S companies.

The Chief Executive Officer of Airbus Guillaume Faury repeated calls to negotiate the dispute urging the Trump administration to consider the likelihood that the WTO decision on Boeing approaching could impose tariffs against the United States that could be substantially higher than the U.S. tariffs permitted as a result of this WTO decision.