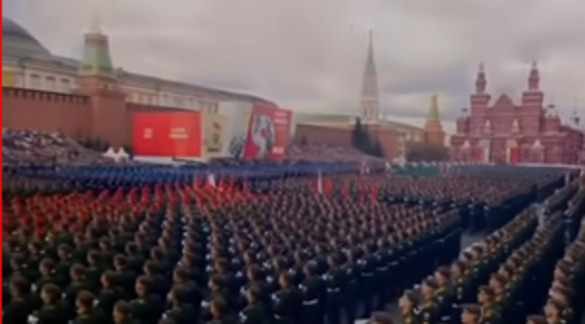 Putin Gives No Way Out of War on Victory Day. He wrongly framed his invasion of Europe as an extension of the fight against Nazism.

On Monday, Russian President Vladimir V. Putin praised his country's army for "fighting for the Motherland" in front of an armored vehicle and soldiers in full uniform. Delivering a defiant speech at the start of annual Victory Day celebrations in which he falsely depicted his invasion of Ukraine as an extension of Europe's struggle against Nazi Germany.

Putin was seated in Moscow's iconic Red Square, wearing a buttoned-up black puffer jacket with a victory ribbon tied around his chest. At the same time, he watched soldiers and military vehicles drive past in the background.

However, he had a big green blanket wrapped around his legs, which had been provided for him on his seat when he first arrived at the observation platform.

It is estimated that the temperature was roughly 48 degrees Fahrenheit.

Russian President Vladimir Putin's physical and mental health continues to deteriorate, with frequent allegations that he has Parkinson's disease and will undergo cancer treatment within the next few months.

Vlad then delivered an 11-minute address in which he stated that Russia was battling Nazis in Ukraine and that the West was planning an invasion of Crimea, among other things.

The significantly truncated speech did not comport with expectations that Putin would either declare victory over Kyiv or command a total mobilization of the Russian army against the Ukrainians.

In addition to demonizing Ukrainian fighters as "Nazis," as he has done throughout the war, Mr. Putin did not announce any changes to the military campaign. Still, he attempted to channel Russian pride in defeating Nazi Germany into support for his invasion of Ukraine during the raucous military parade in Moscow's Red Square.

The speech appeared to be directed at a domestic audience; he insisted once more that Russia had been coerced into the war and offered a rare acknowledgment of the toll taken by the fighting, promising that his government would do "everything possible" to assist the families of fallen soldiers who died in the fighting. However, he did not reiterate his implicit warnings of nuclear annihilation. Notably, after more than two months of battle in which his army has frequently failed and is now trapped in a more violent stalemate, he did not declare "winning" in Ukraine, implying that the conflict will continue.

According to a speech issued on Monday, Ukrainian President Volodymyr Zelensky rebuked Russian President Vladimir Putin's view of history, stating that the Russian leader's conflict was "repeating the awful atrocities of Hitler's reign in our time."

Russian forces have increased the intensity of their attacks across eastern and southern Ukraine, launching a barrage of missiles and artillery across the Luhansk region on Monday, despite their inability to gain significant additional land. In the east, Ukrainian forces have waged a vigorous counteroffensive that has pushed Russian soldiers to relocate to the area around Kharkiv, preventing them from strengthening stalled operations elsewhere. Ukrainian troops have been supported by more weapons supplied by the United States and its allies.

He invoked the spirit of The Blitz by comparing despot Vladimir Putin's ruthless forces to those of Adolf Hitler's Nazis on the occasion of the 77th anniversary of the conclusion of World War II in Europe.

"The British people did not forget how the Nazis cleaned out Coventry, which was bombed 41 times," he said, praising the country for remembering the tragedies of war and standing behind his country.

Mister Zelensky used the opportunity to dig at other countries that remain in Putin's good graces. "Unfortunately, there are those who, having survived all these crimes, having lost millions of people who fought for victory and achieved it, have desecrated their memory and feat today," he said.

He claimed that the Russian invaders had massacred around 20,000 Ukrainians since February 24, more than twice the number of people killed by the Nazis throughout their two-year rule of the country. But Mr. Zelensky said that although "evil has returned," there would be "peace again" one day.

He added: "We will overcome the winter; it will definitely end. And we will meet our dawn together with the whole country. Family and loved ones, friends and relatives will be together again."