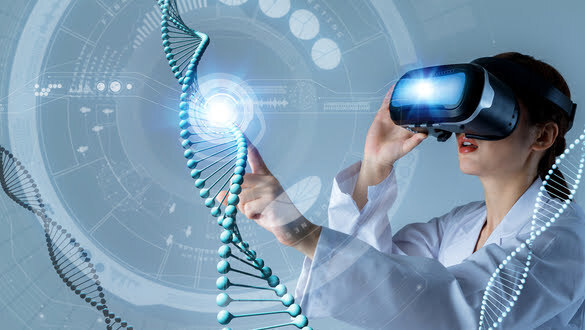 The best stock investments you can make going forward for the future are thought to be by many of Wall Street’s expert technology analysts are in the accelerating technology of Artificial Intelligence.

Cathie Wood, the CEO of $75 billion asset manager Ark Invest and the stare stockpicker featured at last month’s Milken Institute conference, believes that investors should be focused on what she thinks she’s found the next big thing in investing…

“We were assuming that in the next 10 years, artificial intelligence would deliver, in the enterprise software space, a market cap opportunity of $30 trillion. Our new number is $80 trillion.”

“We think that is the big new frontier.”

Wood has a great deal of credibility when it comes to investing in breakthrough technology. Her flagship fund ARK Innovation ETF (ARC: ARKK), has delivered a total return of 472% over the last five years, substantially outperforming the S&P 500 over the same period. The ETF is trading at $117 per share.

With a return on investment like that, we should all listen closely. At the Milken Institute conference, she identified three attractive AI plays in today’s market: her EFT portfolio…

NVIDIA (NASDAQ: NVDA) Nvidia’s graphics processing units have long been a favorite among video game enthusiasts. But the company’s capabilities extend far beyond the gaming market.

For instance, its “system on a chip” solutions are widely used in mobile computing and automotive markets.

The Californa-based chipmaker, believed by most analysts knowledgeable about AI as positioned to play a crucial role in driving business into adopting this breakthrough technology. Nvidia’s head of enterprise computing Manuvir Das earlier this year…

NVIDIA growth and earnings are firing on all cylinders. In Q2 of its fiscal 2022, revenue surged 68% year over year and 15% sequentially.

As a result, Nividia shares have been a favorite for technology investors. Nvidia shares are up 124% in 2021 and are now trading at just under $300.

Alphabet (NASDAQ: GOOGL) Google’s parent company Alphabet is a massive tech conglomerate commanding a market of nearly $2 trillion. Its focus on Artificial Intelligence is already evident by the huge part of the company’s product lineup. Whenever you search for something in Google, Artificial Intelligence is being used to find out precisely what you’re searching for and go even further to deliver search results based on what it knows specifically about you.

Alphabet also recently announced the creation of a new subsidiary — Isomorphic Laboratories — which intends to use AI methods for drug delivery. It’s built off of the work done by Alphabet’s AI subsidiary DeepMind.

But you’d don’t have to start big. These days, you can build your own AI portfolio just by using your small change.

C3.ai (NYSE: AI) C3.ai is a small company compared to Nvidia and Alphabet, with a market cap of just under $5 billion. But if you believe in Wood’s AI market projection of it becoming an $80 billion a year industry, AI shouldn’t be ignored.

The company focused like a laser on AI technology. So the stock symbol isn’t a cheap gimmick.

C3.ai’s focus is on becoming one of the most reliable AI software providers. It is already generating the bulk of its revenues from subscriptions sold to businesses using AI technology from a wide range of industries.

At quarter-end, C3.ai’s total enterprise AI customer count stood at 98, representing an 85% increase year over year. Given Brooks’s prediction of total revenues reaching $80 Trillion a year, the company’s stock performance, which is down more than 65% in 2021, shouldn’t be negative; it should be a clear signal of a buying opportunity.