An Unprecedented Pandemic of the Unvaccinated 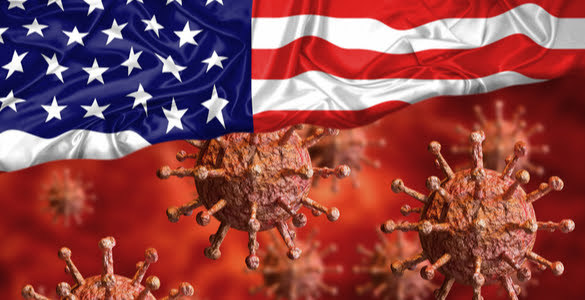 The United States faces the sad realization that many Americans will be facing horrible unnecessary death due to their stupidity and ignorance.

Following a spike in outbreaks caused by a highly contagious Delta version of the coronavirus in the United States this week, the head of the Centers for Disease Control and Prevention warned that "this is becoming a pandemic among the unvaccinated."

Although the number of cases, hospitalizations, and deaths have decreased significantly from last winter's peak, and vaccines are effective against Delta, the Centers for Disease Control and Prevention's director, Dr. Rochelle P. Walensky, urged people to get fully vaccinated in order to receive robust protection, encouraging them to "do it for yourself, your family, and your community."

In addition, do it to safeguard your little children, who are unable to get vaccinated for themselves at this time."

According to officials during a White House briefing on the pandemic, the number of new virus cases is expected to rise in the following weeks. The majority of those cases concentrated in areas with low vaccine coverage.

Doctor Walensky expressed concern that the number of preventable instances, hospitalizations, and, unfortunately, deaths among those who have not had vaccinations will continue to rise.

According to a database maintained by the New York Times, the country reached the milestone of 34 million cumulative cases on Friday.

Delta is now responsible for more than half of all new infections in the United States, and the number of cases has been increasing in every state.

Over 28,000 new cases are reported every day, increasing from just 11,000 instances per day less than a month ago.

At this point, research suggests that many of the vaccines — notably the Pfizer-BioNTech vaccine, Moderna vaccine, and Johnson & Johnson vaccine – give adequate protection against Delta, particularly against the worst outcomes, such as hospitalization and death.

Only those aged 12 and older are eligible for complete vaccination in the United States, even though about 60 percent of adults have been fully vaccinated.

The Covid-19 response coordinator for the Obama administration, Jeffrey D. Zients, stated at the briefing that the country had progressed significantly in the fight against the virus over the years.

Since the spring, the rate of immunization has decreased significantly, and vaccine coverage remains exceptionally uneven.

Delta is already increasing the number of cases in underserved areas by vaccination, such as Missouri, Arkansas, and Louisiana.

In mid-May, when cases were on the decline, the Centers for Disease Control and Prevention (CDC) stated that fully vaccinated people could go without wearing masks in most situations. On July 4, President Biden hosted an event at the White House for essential workers and others to celebrate progress against the virus.

As the number of reported cases rises, Americans may be forced to navigate seemingly conflicting messages, with local health officials advocating something that may be different from the Centers for Disease Control and Prevention's broad guidance.

The World Health Organization has reiterated its suggestion that even those vaccinated should continue to wear masks because of the global expansion of Delta virus infection.

The Centers for Disease Control and Prevention has maintained its mask guidance, with Dr. Walensky citing the World Health Organization's global jurisdiction as well as the reality that wealthier nations have snatched up the majority of the available vaccines.

She has also stated that local officials in the United States can implement more strict measures to protect those who have not been vaccinated.

Los Angeles County announced on Thursday that it would reinstate an indoor mask requirement for everyone starting this weekend, regardless of whether or not they were previously vaccinated.

During a speech on Friday, Dr. Walensky emphasized the country's diversity and stated that "these decisions must be decided at the local level."

She continued, "If you have placed with poor vaccination rates and high case rates, I would recommend that local politicians explore if masking at that time would be something that would be beneficial for that community."

According to Mayor Bill de Blasio, there are presently no intentions to reinstate an indoor mask requirement for all residents of New York City, nor does he believe that such a move is necessary for the current climate.

During a recent string of more than 400 cases each day, the city has reported, compared to an average of approximately 200 cases per day just a few weeks ago.

According to de Blasio, the Delta variant needs to be watched closely, who stated this on a radio show.

He explained that health officials are concentrating on hospitalizations, which have remained low in recent weeks.

According to local data, approximately 53 percent of city inhabitants have had all of their vaccinations.

He believes that if hospitalization rates continue to climb, the city will be able to adjust.