Gasoline lines and needed fuel supplies can worsen as panic buying continues and the Colonial Pipeline is not reopened by the weekend.

Residing in South Florida and seeing my state on the pipeline distribution network, I woke up fearing long lines and the possibility of out of gas signs hanging from pumps at my local service station. To my delight, that was not the situation, and I rolled up to a pump effortlessly and full my vehicle. Unfortunately, many other east coast residents were not as fortunate.

The Colonial Pipeline was struck with a terrorist ransomware attack five days ago, holding hostage the east coast U.S. transportation infrastructure. The Colonial Pipeline is the primary outlet for oil, diesel, and jet fuel distribution in the United States, linking Gulf Coast refineries to urban centers ranging from Atlanta to New York and beyond.

Colonial transports approximately 2.5 million barrels per day and transports their petroleum product over 5,500 miles of pipeline. This accounts for about 45% of the east coast distribution.

Speculating like I on the possible closure of the service stations, North Carolinians hurried to fill up on the day of the rumor of potential fuel shortages on Wednesday.

Officials and analysts from both the public and industry claim the rise in demand has more to do with the unexpected reduction in customer buying habits than the pipeline closure.

Anxiety caused by the pipeline shutdowns around the country has pushed many thousands of gas stations to run dry.

Many others have placed limitations on the number of transactions they make.

Industry experts are pleading that people should not store fuel and should only refill their tanks when they are required to.

Currently, gasoline prices are rising because of an increase in demand and not due to the short-term shortage created by the pipeline closure.

Elected officials are asking for patience. “I’m urging everyone to be careful and be patient,” said South Carolina’s attorney general, Alan Wilson.

The Virginia Department of Emergency Management tweeted on Wednesday, “Remember when it wasn’t a good idea to panic buy toilet paper last year? Please don’t do it with gas now.”

Darkside, the cyber hackers behind the ransomware assault on the East Coast pipeline, claimed that they were not attempting to undermine the nation’s energy infrastructure but rather to “gain money.” What they have done is to instill a resolve at all areas of U.S. cyber-security to not allow this to continue.

In the short-term, an executive order is in place by the White House to ease specific environmental regulations to facilitate transportation over U.S. highways of petroleum from other areas of the country.  Officials at the White House said they were taking action to make it easier to ship, train, or truck diesel but admitted that the process would take time.

“Cyberattack was a reminder that infrastructure is a national security issue and investments for greater resilience are needed.”

72% of gas stations in Raleigh and Durham have been out of fuel since Tuesday, and they will likely be out of fuel all of Wednesday; Patrick Haan, who is with the gas forecasting firm GasBuddy, tweeted this. 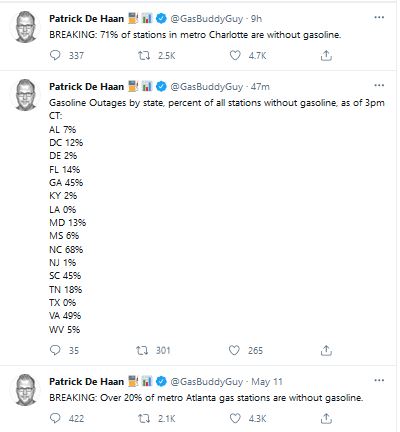 Similarly, 71% of gas stations are out of gas in Charlotte, Washington, and New Bern are out of service.

The outage was around twice as strong in the Southeast as in the rest of the nation, by 20 percentage points.

In Georgia and South Carolina, 42% of petrol stations are still out of operation.

A statement by Colonial indicates that they expect the pipeline to be back in operation by the end of the week.