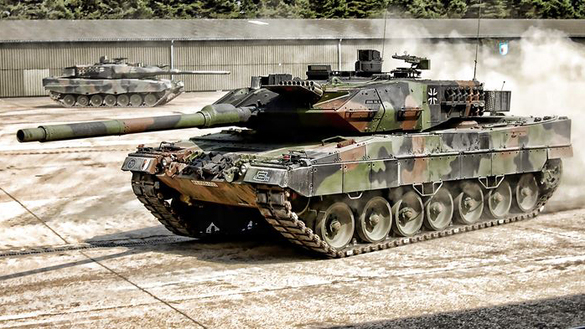 The German Leopard 2 main battle tank has a stellar reputation for being among the finest in the world. Because of its valiant participation in the conflicts that came before, this reputation seems to be unassailable. Its cutting-edge design competes with other innovative vehicles, such as the American M1 Abrams and the British Challenger 2.

In recent weeks, several military experts from the United States and other countries, as well as the leaders of Ukraine, have said that it looks Russia is preparing for an operation that will take place in the late winter or early spring. It is not quite apparent if the supply of Western tanks, notably the Leopard 2 model, would soon reach the war front to counteract that danger.

On Friday, western defense officials could not agree on exporting battle tanks made in Germany or the United States to Ukraine. This was a setback for Ukraine's hopes of quickly obtaining weapons that it considers to be essential to its defense against an expected new Russian offensive.

U.S. Defense Secretary Lloyd J. Austin III told reporters after the U.S.-led meeting of Ukraine's allies that took place at Ramstein Air Base in Germany that Germany had not yet decided whether or not to allow its Leopard 2 tanks to be sent to Ukraine. The United States led the meeting. The United States government has been hesitant to supply its own M1 Abrams tanks, and Mr. Austin noted that he did not have any announcements on whether or not this position will alter.

After many months of reluctance from other nations, the United Kingdom has already decided to supply Ukraine with a limited number of its Challenger 2 tanks. This decision was partly taken to convince other countries to contribute their tanks. Kyiv has been asking Western nations to provide it with hundreds of modern combat tanks to replace its fleet of Soviet-era equipment in poor condition.

There have been numerous variants of the Leopard 2, each with unique capabilities and aesthetics. The tank, which has a night-vision system and a laser range finder that can estimate the distance to an object, can better aim at a moving target while it is driving across difficult terrain since it is caused by a diesel engine. Additionally, the tank has night-vision equipment.

Up until this point, both Russia and Ukraine have deployed tanks from the Soviet period in combat, but switching to Leopards would be a significant improvement in terms of capacity. In addition to previous shipments of military assistance from friends in the United States and Europe that included aircraft, air defense equipment to defend against Russian missile and drone assaults, and longer-range artillery, the government of Ukraine has been requesting tanks.

The delivery of Leopard 2 supplies would assist in countering Russia's supremacy in artillery firepower, which played a role in Russia's capture of two cities in the Luhansk Province in eastern Ukraine earlier this summer. They may be of particular use now, as the conflict is about to enter its second year, and Ukraine is working to recapture lost territory while anticipating an onslaught by Russia in the spring.

Officials in Ukraine had held out hope that a new agreement would be reached that would either enable other nations that had tanks of the same kind to deliver them to Ukraine or send Germany's Leopard 2 main battle tank to the front lines of the conflict in Ukraine.

Throughout the last several days, Germany and United States officials have been engaged in fruitless negotiations about the problem. The larger group of 54 nations could not come up with a solution allowing other countries to send their supply of the Leopard 2 either.

However, when a reporter questioned Mr. Austin if authorities had discussed the supply of tanks produced in Germany, Mr. Austin directed the reporter to previous statements from Germany's military minister, who had said that a decision had not yet been taken. Mr. Austin said, "I don't have any announcements to make," in response to a question about whether or not the United States will send its own M1 Abrams tanks.

Officials at the Pentagon have argued for many weeks that sending the Abrams tanks to Ukraine at this time would not make much sense because the tanks operate on jet fuel rather than diesel and are difficult to maintain.

The failure to reach an agreement was guaranteed to dissatisfy a great number of Ukrainians, especially considering that the country's president, Volodymyr Zelensky, had previously made an impassioned plea to those in attendance to dispatch tanks.

While speaking on live streaming, he said, "Hundreds of thank-yous are not hundreds of tanks." "In the course of these conversations, we may all use thousands of words, but I cannot use words in place of firearms."

Germany has been reluctant to provide some of its Leopard 2 tanks unless the United States is willing to contribute at least a symbolic number of its Abrams tanks. However, during a break in the sessions, Germany's new minister of defense, Boris Pistorius, said that the stumbling block in the negotiations was not as clear-cut as previously thought.

Publicly, many of Germany's European allies were exerting pressure on Germany to concede to their demand that other countries, particularly Poland, re-export their Leopard tanks to Ukraine. Because the tanks were manufactured in Germany, the government in Berlin must provide its consent before they could be sent to any other nation.

Officials in Germany have said it is against the law to re-export tanks built in Germany without first obtaining approval from Berlin.

Should a country desire to ship such weapons to another nation, it is required by the contracts that it signs to buy weapons from German manufacturers or German military stockpiles that it first seek a re-export authorization from the German federal government. (Other nations, like Switzerland, have restrictions comparable to those of the United States.)

During a pause in the discussions, Mr. Pistorius said that no agreement had been reached on that matter either.

He informed reporters that there was no general agreement. As some people have done on occasion, it should not be assumed that there is a unified coalition and that Germany is obstructing it since this is not the case.

Poland and Finland have indicated that they are willing to send Leopard tanks, but they are waiting for authorization from Germany.

It is not a matter of deciding whether or not to arm Ukraine to defend itself against Russian aggression.

Actual human blood is being spilled in Ukraine. "This is the price of reluctance over Leopard delivery," Poland's foreign minister Zbigniew Rau posted on Twitter.