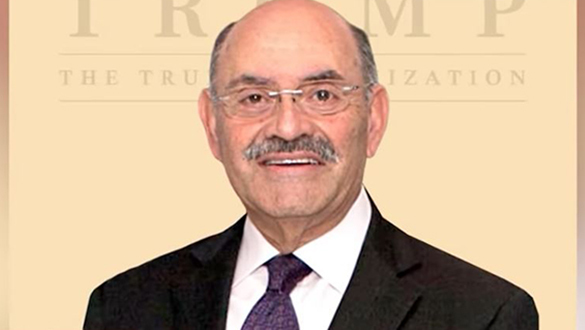 The former Trump Organization finance head Allen Weisselberg testified in Manhattan State Supreme Court in the company's criminal trial on tax fraud allegations. Weisselberg did precisely what he had refused to do for over a year: he went against Trump.

Allen Weisselberg facing the possibility of having his sweetheart sentencing deal for his guilty plea in August for arranging payments to him of $1.76 million in untaxed, off-the-books perks from the Trump Organization, suddenly pulled off the table, went ahead and testified, confirming several key facts of the New York City district attorney's case against the former president's company.

Weisselberg also confirmed while on the stand that he helped facilitate illicit compensation schemes that lined the pockets of executives just like he did for himself, which has been spelled out in the 15-count indictment of the Trump Organization.

The former Trump executive agreed to "testify truthfully" against the Trump firm and did not disappoint despite his reluctance to testify. On the stand, Weisselberg testified that former President Trump suggested in 2005 that he move into a luxury Riverside Drive apartment using company funds and even signed the lease for the property. It appeared to be the deal of a lifetime that not only didn't require him to pay rent, but the Trump Organization also paid his utility and parking fees, according to the indictment.

Is it your understanding that Mr. Trump authorized it this arrangement?

"That was my understanding, yes," Weisselberg answered.

"He said it would help me be able to spend more time at the office rather than sitting on a train for three hours back and forth [from Long Island] … and make my life easier," Weisselberg told the jury.

The payoffs extend to Weisselberg's son.

According to the NYC District Attorney's criminal complaint, Trump's companies also paid for Weisselberg's "homes and for an apartment maintained by one of his children," including "new beds, flat-screen televisions, the installation of carpeting, and furniture for Weisselberg's home in Florida."

Once on that stand, Weisselberg admitted that he knew he owed taxes on the Upper West Side apartment and leases on two Mercedes-Benz and his grandchildren's private school tuition. He also confirmed that he underreported his income and thus knew his city, state and federal tax forms were false.

When ADA Susan Hoffinger asked if Trump paid for the private schools personally, Weisselberg immediately answered by saying "correct" and added that he knew these perks should have been taxed, but he and the Trump Payroll Corporation did not treat them as reported income on his W-2s.

"Did you know at the time you owed taxes on those amounts, sir?"

"In my mind, I absolutely felt that [McConney] knew it should have been reported,"

"I asked Jeffrey McConney to back those amounts out of my bonus and salary."

Weisselberg said he knowingly withheld information about the perks from accountants because he knew they were inappropriate. "They may not have wanted to sign my tax return and prepare my taxes."

Weisselberg also testified that the tax fraud helped both him and the company, as the Trump Organization would have had to give him a raise double the amount they spent on his personal expenses to provide the same benefit if taxes were withheld.

Trump authorized Weisselberg's compensation and that of other senior executives and had an "open door policy" within the company, according to Weisselberg's testimony.

"Did you authorize compensation for Matthew Calamari?" she asked.

Weisselberg's plea deal for his testimony is expected to be sentenced to five months in Rikers Island prison, with an additional five years' probation period to follow his incarceration. However, if he violates the agreement, he could face up to 15 years, according to Judge Juan Merchan. He is also expected to return $2 million in unpaid taxes.

Remarkably Weisselberg's testimony revealed that even after stepping down as CEO, pleading guilty, and testifying against the company, he is still receiving his full six-figure salary and continues to show up to work in Midtown Manhattan. He advises Eric Trump on business dealings and oversees company cash management.

Weisselberg also celebrated his birthday at Trump Tower after finalizing his plea deal.

"It was a small cake. It was a cake. That was the party," he said of his birthday celebration.

Weisselberg testified that he is now on a paid leave of absence and told the jury that he would "hopefully" receive his $500,000 bonus in January in addition to his $640,000 yearly salary.

As for the Trump Organization, if convicted, they could be fined $1.6 million. Trump is not on trial, but prosecutors have closely connected him to the alleged illegal activity. In the opening statements on Oct. 31, prosecutors said that "when most of the criminal conduct occurred," between 2005 to 2017, the companies were "owned by Donald Trump."

Even after Trump became president, the enterprises "were still effectively owned by Donald Trump through a trust called the Donald J. Trump Revocable Trust," according to Hoffinger.

During her opening statement, Susan Necheles, who represents the Trump Corporation, conceded that Weisselberg was the guilty party and when it came to the company's tax fraud, he was the only one "paraded in front of cameras in handcuffs" and would endure "public humiliation."

Necheles went on to say...

"This was a man who had a beautiful life; he was a chief financial officer of a prestigious company, and at his peak, he made over $1 million a year and lived very well,"

"Allen Weisselberg had everything a man could want. But once he was arrested, he realized he was in danger of losing all of that and being sentenced to jail for years."

In response, the NYC prosecution dismissed this argument when they called Trump Organization controller Jeffrey McConney to the stand. Despite McConney's attempt to play dumb about his role in the tax scheme, assistant district attorney Joshua Steinglass was determined to get a straight answer from him…

"You have a college degree in accounting, correct?"

"You worked at an accounting firm for eight or nine years before you joined the Trump Organization, correct? You were in charge of payroll at a multi-billion-dollar corporation for 30 years… you're a paid tax preparer. That requires at least some familiarity with the tax code, correct?"

McConney continued to insist that he wasn't aware the company needed to report untaxed corporate benefits.

Tensions have been rising since Monday when McConney testified that he didn't know creating a fake job for Weisselberg's wife so that she could gain taxpayer benefits like Social Security was illegal. McConney insisted…

"I knew it wasn't correct,"

"Wasn't sure it was illegal."

Jurors also heard from Trump Organization accounts payable supervisor Deborah Tarasoff, who admitted that Weisselberg instructed her to return and delete evidence of a crime.

When asked why a copy of the company's ledger the DA's office obtained via a subpoena was missing the instruction "per Allen" next to a listed, untaxed company perk, Tarasoff responded: "somebody went in and deleted the name." Asked who, Tarasoff said, "me." She also admitted that on Sept. 26, 2016, she and McConney deleted a dozen of those lines from the company's ledgers.

While the penalties are limited to $1.6 million for the Trump Organization and Trump is not on trial, there is a danger that New York States Attorney General or even New York City's District attorney could criminally charge not only the former President but also one or more of his oldest children. Stay tuned.