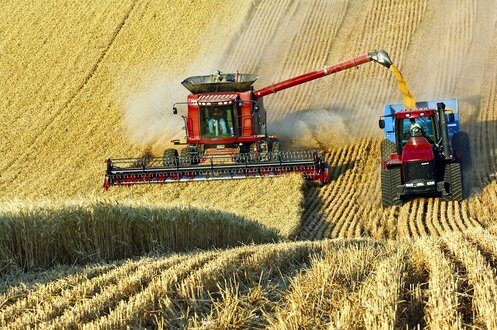 One of the world's largest exporters in agriculture commodities has been shut down indefinitely by hostile military forces. Farmers and dockworkers have sought personal protection or left the country entirely.

Ukraine is a major exporter of agricultural commodities in the world. Market analysts are afraid that the food supply may be disrupted globally due to the current invasion by Russia.

Ports in Ukraine that ship wheat and other food essentials throughout the globe to be processed into bread, noodles, and animal feed are closed as millions leave or remain to fight in the conflict.

If the fighting continues, nations that depend on cheap wheat shipments from Ukraine may face shortages beginning in July, according to International Grains Council head Arnaud Petit.

The battle might limit food supply, causing food insecurity and pushing more people into poverty in nations like Lebanon and Egypt, where bread dominates diets. Russia and Ukraine account for roughly one-third of global wheat and barley exports. Ukraine is also a significant grain producer and the world leader in sunflower oil, which is used in food manufacturing.

Due to the conflict, stores throughout the United States, including Kroger, have already begun removing Russian-made vodka from their shelves. According to The Wall Street Journal, as of March 1, at least 11 states, including Oregon, North Carolina, and West Virginia, have prohibited the sale of Russian-made alcohol in liquor shops.

"As America's grocer, we're taking action to demonstrate our support and solidarity with Ukraine," Kroger said on Twitter through the official Kroger News account. "We removed Russian-made vodka off our shelves over the weekend."

Officials in Europe are prepared for possible shortages of Ukrainian goods. Increased pricing for animal feed, another major Ukrainian export, may result in price increases for meat and dairy goods.

Ukrainian farmers have been forced to abandon their farms. According to The Associated Press, "there are concerns that Western sanctions might disrupt Russia's grain shipments."

Bottom line: Putin asserted Ukraine has no right to exist as an independent nation. This is in defiance of international law.

These recommendations were made to our World Opportunity Investor financial newsletter subscribers in an alert on February 22, 2022.