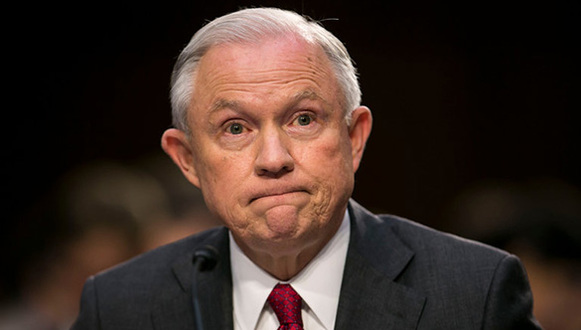 "You know, the only reason I gave him the job is because I felt loyalty. He was an original supporter.”

Attorney General Jeff Sessions learned today from President Trump’s Fox & Friends interview this morning that the only reason he was offered his cabinet post was the President believed him to be loyal. No other consideration was cited as a factor in the decision to nominate him…

“And by the way, he was on the campaign,” Trump said on Fox. "You know, the only reason I gave him the job is because I felt loyalty. He was an original supporter.”

Trump went on to insist that …

“Even my enemies say Sessions should have told me that he was going to recuse himself from the Russia probe.”

“I put in an attorney general that never took control of the Justice Department,” Trump said during the interview, which was taped Wednesday at the White House. “It’s sort of an incredible thing.”

“Jeff Sessions recused himself, which he shouldn’t have done, or he should have told mJeff Sessions,” Trump said. “He took my job, and then he said, ‘I’m going to recuse myself.’ I said, ‘What kind of man is this?’ ”

The problem with that logic of course is the DOJ ethics review panel recommended that Session’s recuse himself after AG Sessions appeared to make a few statements under oath regarding his contact with Russian government officials during the 2016 Presidential campaign in front of the both the Senate Judiciary and Foreign Relations committees - that later proved to be perjury.

To head off a backlash on his “conflicting statements” Sessions recused himself.

The Attorney General responded to Trump’s beligerant tyraid by making it clear the U.S. Justice Department would not be “improperly influenced by political considerations.” Sessions it appears has finally drawn a red line in the sand. He’s not willing to violate the law, or U.S. Constitution out of misguided loyalty to Trump.

Unlike prior attacks, two Republican Senators who are willing to do anything to protect the President, even cover up his crimes by using the majority they hold in the upper chamber of Congress, suggested Sessions could be replaced following the November elections.

Sen. Lindsey Graham (R-S.C.) told reporters that he thinks it’s “very likely” Trump will replace Sessions but cautioned against doing so before the midterm elections.

“The president’s entitled to an attorney general he has faith in, somebody that’s qualified for the job, and I think there will come a time, sooner rather than later, where it will be time to have a new face and a fresh voice at the Department of Justice,”

“Attorney General Sessions doesn’t have the confidence of the president.”

“I’m just very generically telling people that I’ve got time for hearings this fall,” he told The Washington Post.

Asked whether he still has confidence in Sessions, Grassley responded…

“I took control of the Department of Justice the day I was sworn in, which is why we have had unprecedented success at effectuating the President’s agenda—one that protects the safety and security and rights of the American people, reduces violent crime, enforces our immigration laws, promotes economic growth, and advances religious liberty.”

In an interview on “Fox & Friends” on Fox News broadcast earlier today, Trump once again raged over Session’s failing to take the reins in a department that the president characterized as dominated by Democrats and unwilling to prosecute Democratic corruption.

Shortly after releasing his statement, Sessions arrived at the White House for a previously scheduled meeting on prison reform.

Ever since Sessions’ recused himself in early 2017 from overseeing the probe into Russian interference in the 2016 election, Trump has privately and publicly castigated and complained about his attorney general not being like Eric Holder who had “Obama’s back.”

Mueller is scrutinizing the efforts of President Trump to obstruct the Russia probe by removing Sessions or Deputy Attorney General Rosenstein.