In a stunning surprise, the Attorney General of the United States William Barr dashes any hope Trump had of overturning his landslide loss to President-elect Biden says… “There’s no evidence of voter fraud that could overturn the election.”

Apparently, Bill Barr has drawn a line in the sand and isn’t the devoted sycophant President Trump thought he was. Speaking to the Associated Press yesterday, Barr said that the Justice Department had not uncovered any evidence to support President Trump’s claims of mass voter fraud in the 2020 election. 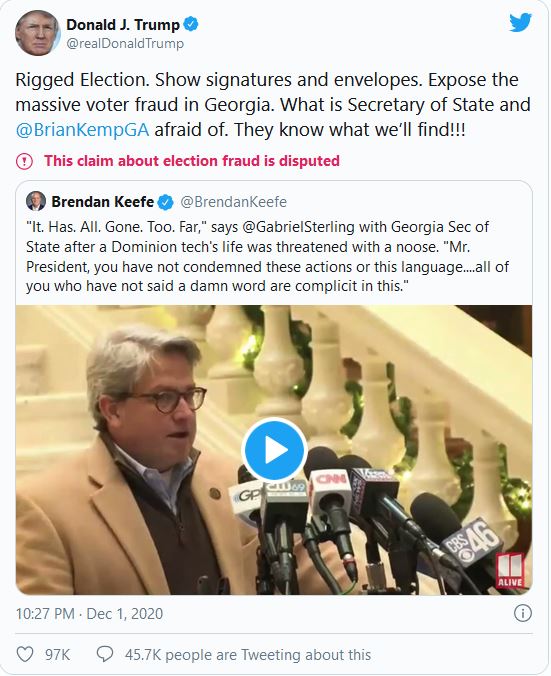 This contradicts the Republican Party members, the Trump Administration and directly contradicts President Trump’s claims that he won the 2020 election and was cheated by widespread election fraud. Trump has gone as far as insisting in a tweet last week….

“Biden can only enter the White House as President if he can prove that his ridiculous ‘80,000,000 votes’ were not fraudulently or illegally obtained.”

Despite Trump’s claims of fraud, Barr says that U.S. attorneys and FBI agents have been looking into specific complaints and information they’ve received but have found no evidence that could lead to the election results being overturned. Barr told the AP….

“To date, we have not seen fraud on a scale that could have affected a different outcome in the election.”

AP points out that Barr’s unwillingness to confirm that alleged voter fraud is wildly unexpected and direct coming from Barr, considering he has been one of the president’s most ardent allies and that…

“Before the election, he had repeatedly raised the notion that mail-in voter fraud could be especially vulnerable to fraud during the coronavirus pandemic as Americans feared going to polls and instead chose to vote by mail.”

Trump Campaign lawyers Rudy Giuliani and Jenna Ellis said in a statement: “With the greatest respect to the attorney general, his opinion appears to be without any knowledge or investigation of the substantial irregularities and evidence of systemic fraud.”

Giuliani and Ellis insisted they had “gathered substantial evidence of illegal voting in at least six states.” They had “many witnesses swearing under oath they saw crimes being committed in connection with voter fraud.” It is regretful that the only place Giuliani and Ellis are unable to produce this explosive information is in a courtroom, in front of an eagerly waiting judge.  Asked by a judge recently if he, Giuliani had any fraud evidence - his reply was no.

“As far as we know, not a single one has been interviewed by the DoJ,” they said, adding: “Nonetheless, we will continue our pursuit of the truth through the judicial system and state legislatures.”

Bill Barr: No evidence of fraud