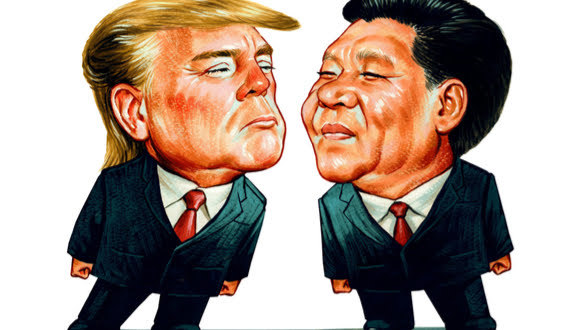 President Donald Trump warned Monday he will slap huge new tariffs on China if President Xi Jinping fails show up for a planned face-to-face meeting later this month at the G20 summit on June 28-29 in Osaka, Japan.

We may not only have the most corrupt President in history but sure is the dumbest in the White House right now. Trump is behaving as if he believes his hard line with Mexico that has proven to be a huge choreographed faked crisis has proven how tough he is, instead of what a conman he is.

This morning he made the rounds calling into various networks showing he has no understanding of diplomacy or how the Chinese think. Trump behaving like a scared adolescent began with braggadocio, insisting the Chinese economy will never overtake the United States. Then moved on to delivering an ultimatum to President Xi that their meeting scheduled during the G20 could mark a turning point in the trade dispute between the world's two biggest economies.

Trump warned that if President Xi refused to meet him for the summit, he would impose tariffs on another $300 billion in Chinese imports. Trump said the meeting was "scheduled" and that he expects President Xi to attend adding …

"I would be surprised if he didn't go. I think he's going; I haven't heard that he's not."

President Xi is now standing up to Trump, and it is putting fear into seasoned and trained trade professionals. United States-Chinese tensions are mounting, and a spokesman for the Chinese government said late last month that he had "no information at present" on Trump-Xi talks which can be interpreted as a subtle hint as to the lack of priority and importance of the face to face meeting.

President Trump’s attempt to strong-arm China into the fundamental change of its economy and trade policies may turn into an all-out trade war that ignites a new cold war between China and the United States.

Attempting to threaten and strong arm China into making changes to its economy which is a hybrid blend of capitalism, socialism, and command by plan isn’t going to happen and is being seen by the Chinese as outright blackmail and intimidation.

This fundamental miss understanding ended talks between the two sides just as Trump and his trade negotiators believed they were close to striking a bargain last month. The Chinese have taken the position that most parties would agree that no part of any deal is agreed to until the whole deal is agreed upon. Trump, however, screamed foul and accused Beijing of walking away from signing the deal at the last minute.

Trump responded with the imposition of more tariffs, commercial restrictions on top of the 25% tariffs imposed on $200 billion of Chinese imports. China has responded with punitive tariffs on $60 billion in U.S. goods and has stopped buying U.S. agriculture products including soybeans.

We now stand at the precipice of President Trump imposing tariffs on $300 billion of goods -- virtually everything American companies import from China -- if no deal is achieved at the G20 Summit. To intimidate President Xi, the U.S. Trade Representative office has launched the process to impose huge new duties, with a hearing scheduled for June 17.

President Trump’s stated intention to ultimately force manufacturers to leave China and that "China's going to make a deal because they're going to have to make a deal" shows a basic lack understanding of the Chinese culture. No foreign power is going to force China to do anything its leaders don’t want to do. To allow that to happen would force its leaders to lose face.

Trumps repeated claim that China would lose simply because they have far fewer U.S. imports that they can target with tariffs in response to our levies of tariffs on their imports….

"We have a big, big advantage."

…ignores astoundingly ignorant. The risk of…

·        China is shutting down all exports of rare earth metals to the United States and crippling our nation’s technology and military manufacturing sectors. While we would likely renew our mining programs here in the United States, it could take 10 to 15 years to replace.

·        China could stop all U.S. Treasury and bond purchases and instead invest in gold, platinum, and Euro bonds.

·        China is amassing a re-unification blockade and even invasion of Taiwan.

·        Ceasing all agricultural and other purchases from the United States. This could send a slowing global economy into a recession our country cannot escape.

·        It is stepping up its cyber warfare and intelligence programs, with the sole intention of defeating Donald J. Trump in 2020.

During a lengthy CNBC interview, Trump said he is doing what previous U.S. Presidents avoided because they…

The Chinese will interpret this kind of moronic dialog as being so hostile, and pathetic they may choose to wait until 2021, to negotiate with a new U.S. President and Administration.  They would patiently wait for a new administration that will possibly be more open to addressing issues like intellectual property rights, foreign ownership and the opening of China’s 21 Trillion dollar securities market by not insisting on a fundamental changes in how the Chinese economy works, but instead incremental changes that deliver the changes the United States needs from China.