After Another Aviation Meltdown is an Overhaul Needed? 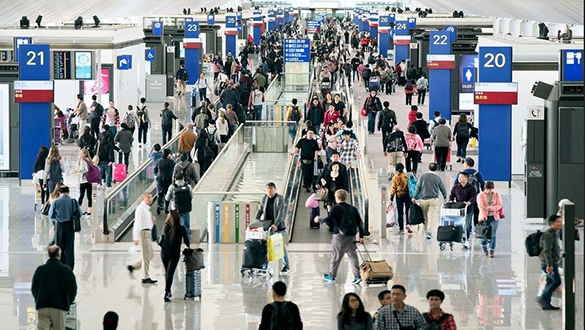 The Federal Aviation Administration said hundreds of domestic flights were canceled due to a corrupt file. As a consequence of yesterday's outage in the FAA's NOTAM system, which gives vital information to pilots, the agency mandated that all commercial departures were grounded.

Cold weather and storms made air travel dangerous around Christmas, delaying or canceling thousands of flights. On Wednesday morning, however, nationwide aircraft were grounded because the FAA's system to warn pilots of safety hazards was down, even though the weather was generally acceptable.

On Wednesday night, the F.A.A. said that the disruption had been traced to a corrupted database file and that a cyberattack could not be ruled out as the reason. The F.A.A., the government body responsible for the safe management of all commercial air traffic, has been under fire for a long time for being overworked and understaffed, and this interruption was just the latest evidence of this.

The Federal Aviation Administration (FAA) has had a difficult time rapidly modernizing its systems and procedures, many of which were established several decades ago. This is necessary for the FAA to keep up with rapid advancements in technology as well as a sharp rise in the number of flights and passengers. The grounding of aircraft throughout the nation brought to light what aviation experts perceive to be obvious flaws in the agency, which has long been regarded as the most effective aviation regulator globally.

On Tuesday night, problems started occurring with the system that is used to inform pilots of threats on the ground and in the air. As a result, authorities were forced to reset the system early on Wednesday morning. Because of the issue, the Federal Aviation Administration demanded that airlines push back the departure times of all flights until just before 7:30 in the morning. This hold was removed at about 9 o'clock in the morning, but the disruption was far from ended, as airlines worked throughout the day to get back to regular operations. As a result of the domino effect of delays across the system, there were about 9,000 flights that were delayed, and 1,300 planes were canceled by the afternoon.

An operational failure that occurred only two weeks earlier on Southwest Airlines, the largest airline in the nation in terms of the number of passengers it transports, caused hundreds of thousands of people to get stuck. When seen in conjunction with one another, the two incidents highlight how fragile the nation's aviation system is.

The Federal Aviation Administration has been the target of criticism for a significant amount of time due to its inability to upgrade its technology systems swiftly and its failure to hire sufficient numbers of air traffic controllers and safety professionals.

Aviation experts believe that a significant portion of the issue stems from the fact that Congress has not allocated the FAA an adequate amount of funding to carry out the many tasks that fall under its purview. Moreover, despite having sufficient resources at its disposal, the agency has occasionally been slow to implement necessary reforms. After accounting for inflation, the organization had a budget of around $18.5 billion in 2022, which was lower than it had in 2004.

William J. McGee, a senior fellow for aviation at the American Economic Liberties Project, a research and advocacy organization that has opposed airline industry mergers, said: "This is an agency that has been chronically and dangerously underfunded, not for years, but for decades."

Since air transport started to recover in 2021 after collapsing in the first year of the epidemic, a number of senators and members of Congress have voiced outrage and worry over aircraft delays and cancellations. Since the F.A.A.'s most recent authorization, approved in 2018, expires this year, the outage will undoubtedly be a focal point of congressional hearings and discussions. This affords legislators the chance to reform the agency, demand improvements, and reset its financing.

Since air transport started to recover in 2021 after collapsing in the first year of the epidemic, a number of senators and congress members have voiced outrage and worry over aircraft delays and cancellations. Since the F.A.A.'s most recent authorization, approved in 2018, expires this year, the outage will undoubtedly be a focal point of congressional hearings and discussions. This affords legislators the chance to reform the agency, demand improvements, and reset its financing.

On Wednesday, Pete Buttigieg, who serves as the secretary of transportation and is in charge of the FAA, said that the government was investigating to determine what caused the outage and why the agency's systems were not more robust.

According to Mr. Buttigieg, "When there is an issue with a government system, we're going to own it, we're going to discover it, and we're going to fix it." In this instance, it was necessary to ensure that there was total trust in the safety of flight operations. It was prudent yet crucial to take a halt and ensure that everything was operating normally before continuing.

According to industry specialists, the Federal Aviation Administration's (FAA) technology has become more antiquated, and the agency has, for a considerable amount of time, lacked the resources necessary to undertake extensive system upgrades that would make those systems more robust.

The Next Generation Air Transportation System, often known as NextGen, was initiated by Congress about twenty years ago as a significant revamp of the country's overall aviation infrastructure. The multibillion-dollar project, designed to enable airlines to run more flights and to replace some of the old equipment used by the FAA, has been plagued with issues and has taken longer than anticipated. Both of these goals are supposed to be accomplished.

In a 2021 report, the Transportation Department's inspector general said that the advantages of the NextGen redesign fell well short of initial expectations but still held potential. The initiative is intended to assist the agency in managing more aviation traffic and create technologies to minimize disruptions like the one on Wednesday.

In recent years, the F.A.A. has fallen short in other areas, such as having insufficient air traffic controllers in some regions of the nation. According to the airline industry and a controllers' union, workforce shortages have caused aircraft delays and cancellations.

According to airline executives and union officials, the air traffic control center in Jacksonville, Florida, has been particularly overloaded with planes. In a lecture, last summer, Rich Santa, the president of the National Air Traffic Controllers Association, stated that severe weather, commercial space launches, and other challenges had exacerbated this situation.

Since hiring and training controllers may take months, and since moving new recruits to the correct areas can take much longer, the agency initiated a comprehensive air traffic controller recruitment drive last year, although the initiative is unlikely to alleviate any staffing difficulties immediately.

The F.A.A. has delegated certain regulatory work to Boeing workers as part of a scheme that saw the firm act as its own regulator. For lack of internal capacity and legal protections, the federal government approved such outsourcing. As a result of the two disasters involving Boeing's 737 Max, the agency also came under fire for failing to do enough to safeguard the plane's safety.

The disruption on Wednesday, according to South Carolina Republican Representative Nancy Mace, was especially annoying since it occurred so soon after Southwest Airlines' Christmas disaster.

Southwest and federal agencies should be subject to the same intense scrutiny, said Ms. Mace, who also stated that she wanted to examine the F.A.A. about its flaws and how it meant to fix them.