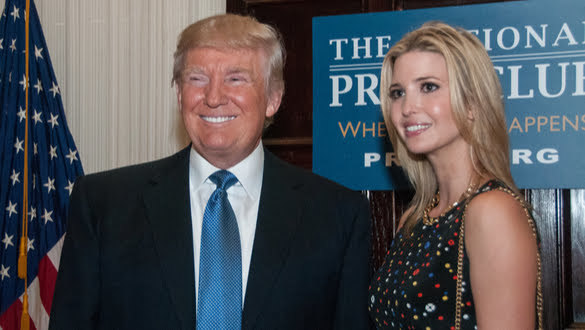 The Lincoln Project has accused Brad Parscale of looting millions of dollars from the Trump campaign. He is now being blamed by scumbags Ivanka Trump and Jared Kushner for the Tulsa rally debacle.

When things go wrong in Trump’s world, someone besides him has to be blamed. President Trump and his family are incapable of recognizing the truth even when reality slaps them in the face repeatedly. When Trump Campaign manager saw 800,000 signups for the Tulsa Oklahoma rally scheduled on the anniversary date of the white riot that slaughtered hundreds of people on “Black Wall Street’ and burned their community down in 1921, he saw it as an opportunity to crow about the decision to hold Trump’s first campaign rally of the general election cycle.

Trump’s strategy was to perpetuate vicious racism sediment to yield a million people to descend on the city of Tulsa to show their support for Trump. 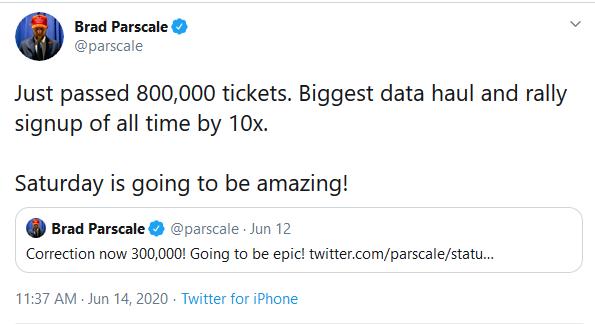 As it turns out, a single rant by a grandmother on the social platform TikTok, created a viral campaign that energized thousands of teenagers across America to “punk” both Parscale, and the Trump campaign.  The Trump campaign bought into the “Fake News” that the rally in Tulsa would be a break out of unparalleled proportions and create an indoor and overflow outdoor event.

Parscale dumbstruck by the reality tried to deflect the embarrassing 6,200 person turnout for what many call the “Tulsa Suicide Rally” by blaming the radical protesters who blocked the entrance into the event.

Parscale was quoted as saying…

“Leftists and online trolls are doing a victory lap, thinking they somehow impacted rally attendance,” Parscale wrote, “don’t know what they’re talking about or how our rallies work. Reporters who wrote gleefully about TikTok and K-pop fans — without contacting the campaign for comment — behaved unprofessionally and were willing dupes to the charade.”

“For the media to now celebrate the fear that they helped create is disgusting, but typical,” he added. “And it makes us wonder why to be bothered credentialing media for events when they don’t do their full jobs as professionals.”

An outright lie, compounded by the claim, the event was sabotaged by apocalyptic media coverage. Which amounted to no more than the same warnings Trump’s health experts Dr. Anthony Fauci and Dr. Deborah Birx told the President. 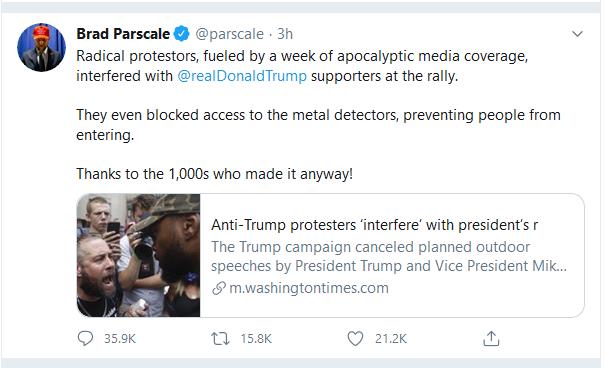 Now a day after the event, his daughter Ivanka Trump and son in law Jared Kushner have concluded the reason for the low turnout isn’t the fact that President Trump's popularity is crumbling nationwide, as reflected in the polls. They believe the debacle in Tulsa is the fault of Trump 2020 campaign manager Brad Parscale. 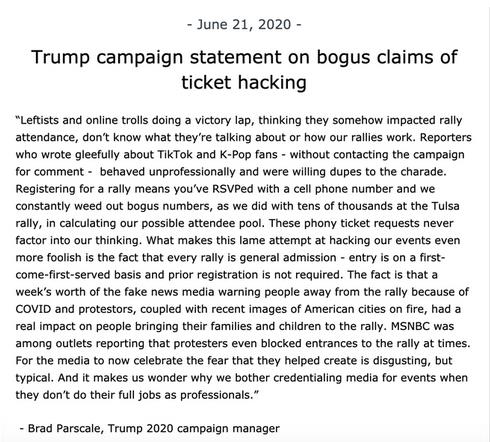 According to CNN’s Jim Acosta, Ivanka Trump and Jared Kushner were said to be “pissed” at the campaign manager because thousands of the arena’s seats were empty. By that, they are referring to the 13,000 empty seats, and a nonexistent turnout of 50,000 supporters President Trump expected to great him before the event in a specially set up outdoor venue next to the arena. 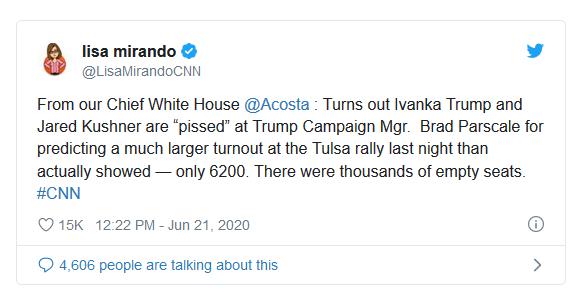 Steve Schmidt and Rick Wilson’s Lincoln Project has been merciless in a steady stream of political videos, pointing to the fact that Parscale doesn’t believe Trump has a chance of being re-elected.  The Lincoln Project has been relentless in trolling Parscale and others cashing in on the hundreds of millions of dollars being raised to fund Trump’s 2020 re-election campaign.