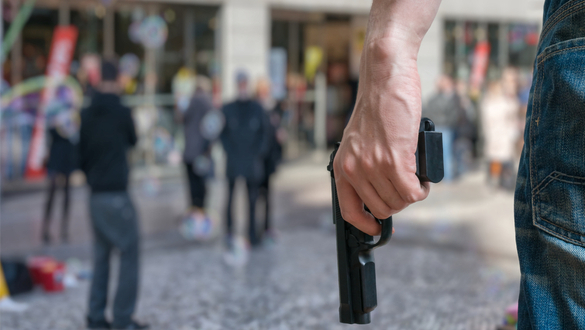 A quicker trial, speeder death sentence is not a policy that will stop the epidemic of mass murders. Taking the weapons of war off the streets here in the United States is the only thing that will work. 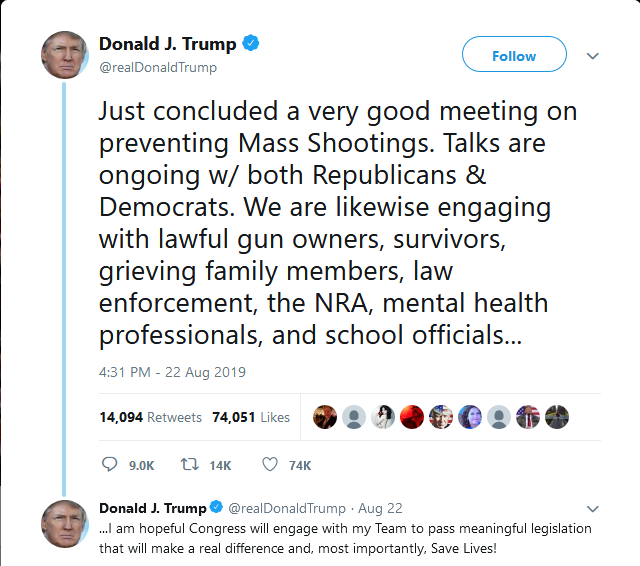 The business of the Republican Party is the business of the NRA. They’re both in the business of selling as many millions of weapons of war to as many people as they can. The NRA and their Republican lawmakers in Texas have proved this insanity by making it legal on September 2, 2019, for a mass shooter to walk into almost any public place with an AR-15 or AK-47 loaded with a modified high capacity clip capable of killing 100 people in less than a minute.

Then, of course, the good guys with guns in a public place, or police get the ability to shoot back and innocent citizens, children or babies shot in the crossfire get to go to heaven. The Republican lawmakers passing these insane laws are bought and paid for by the NRA.

Making America Great Again should begin with a return to a post World War II where weapons of war were illegal, and mass shootings were between rival criminals and G-men. Trump’s vision is to turn the United States into a war-torn banana republic that is terrorized by 300+ in 2019, then 600 next year, then 1,000 mass shootings a year by the end of this decade.

News that Trump’s evil White House minions have been working on measures to address gun violence in the wake of several recent mass shootings is nothing but performance art.

He’s not going to enact the strictest universal background checks for pistols and rifles. He isn’t going to ban AK-45, AR-15 and other killing machines, equipment used in warfare. This man poorly equipped mentally to be President of the United States, will continue talking about mental illness being the problem. Red flag laws would be great and may have prevented the recent El Paso shooting, but it’s time for the American people to understand we could cut the number of mass shooting in our country way down by just taking the weapons of war off the market and the streets.

The biggest issue in the next few elections will become taking the weapons of war off the streets of our country, a buyback program, storage at hunting, and gun clubs laws. All guns will carry the same burden owning a car does by paying yearly for comprehensive and liability insurance. The hard truth is that it’s going to take 600 mass shootings of innocents, including the slaughter of our bravest in law enforcement to change the hearts and minds of those who like Trump’s anti-immigration and build the wall malarkey to force them to the reckoning.

If you’re voting for any Republicans in the next few elections, you should understand you’re voting against your economic, national security interests and also casting votes for more dead babies, children, innocent civilians, and law enforcement officers.

Mass murderers are not going to be scared off their killing sprees by a stricter death penalty. It’s a fake, designed to make you think this scumbag U.S. Attorney General, President, and GOP lawmakers are doing something worthwhile to stop the killing.

We must all take part in national voter’s day, where everyone gives one day off and goes to the polls on November 2020, breaking all records for turnout. Seventy-four million U.S. voters wearing a big middle finger embellished on the front of their shirts with the words… Ban The Private Ownership of Weapons of War Now. On the back of these shirts should emblazon with the same middle finger directed at Trump and McConnell.