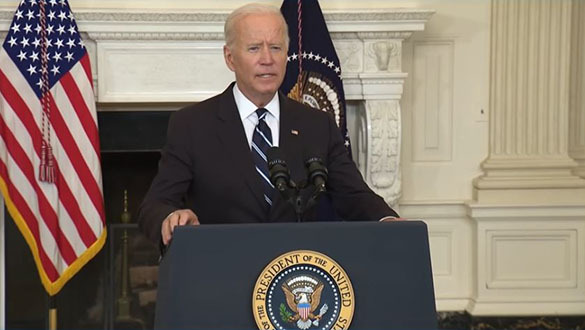 President Biden revealed a six-part plan to combat the spread of the Covid-19 Delta variant, which touched on almost every aspect of society in what amounted to his most comprehensive use of presidential authority.

On Thursday, President Biden unveiled a six-part strategy to fight the spread of the Delta virus. The plan would touch on virtually every area of society, and it represented his administration's most broad exercise of presidential power. This is a true presidential moment where a president makes policy decisions outside the realm of politics and puts his future on the line for “We the People.”

The president's new vaccine mandates for federal workers, large employers, and healthcare providers. Biden said, "This is not about freedom or personal choice; it is about protecting those around you."

New immunization requirements are being implemented.

To increase the number of vaccinated people in the United States, the Labor Department will develop an emergency rule requiring all private-sector businesses with more than 100 employees to require that their workforces be fully vaccinated or test negative at least once every day seven days.

The regulation would have an impact on an estimated 80 million employees.

Employers will also be obliged to provide workers with paid time off to be vaccinated.

Continuing his previous effort to get the government workforce vaccinated, Vice President Biden issued an executive order mandating all executive branch workers and federal contractors to be vaccinated, with no exceptions for those who want to test themselves out of the obligation.

Mr. Biden said that he wanted to expand a vaccine mandate that now applies to health care professionals who serve Medicare and Medicaid patients in nursing homes to include all other medical institutions, including hospitals and in-home care, in the future.

Keeping the virus away from schools is a priority.

Mr. Biden outlined several steps to prevent the coronavirus from spreading in schools and affecting children under the age of 12 who are not yet eligible for vaccination.

He encouraged parents to guarantee that their children aged 12 and older be immunized, and he urged states to require school personnel and instructors to be immunized.

Mr. Biden also said that approximately 300,000 instructors working in federally funded educational programs would be required to get immunized.

“Approximately 90% of school personnel and instructors are vaccinated,” he added.  “We should be able to get it to 100 percent.”

While no vaccination for children under the age of 12 has been authorized, the president said that he would continue to assist the Food and Drug Administration in its efforts to approve one “as safely and promptly as possible.”

Biden also criticized attempts by elected authorities like Florida Gov. Ron DeSantis to repeal municipal mask requirements, many of which apply to schools.

Mr. Biden said that the Education Department was considering legal action against such attempts and pledged that the federal government would reimburse any schoolteacher whose salary was withheld “for doing the right thing.”

Increasing the number of Covid-19 tests and masking mandates

As part of a larger effort to make testing more affordable and accessible, the president said that his government has partnered with merchants such as Amazon and Walmart to bring the cost of at-home Covid-19 quick tests down by 50 percent.

Among the proposals is a roughly $2 billion investment to purchase about 300 million quick tests for use in community health clinics, food banks, and schools "so that every American of any socioeconomic level may receive free and easy testing."

He also said that the Transportation Security Administration would increase the penalties levied on passengers who refused to wear masks when onboard aircraft.

“If you violate the rules, be prepared to pay the price,” Vice President Biden said.

Improving the response and treatment of the virus

As part of his plan to address the rising number of infections and hospitalizations, the president proposed measures such as boosting assistance for overloaded hospitals and introducing innovative treatment techniques.

Contributing to the revival of the economy

As the coronavirus continues to cripple businesses, the president stated that he would expand the loan programs run by the Small Business Administration, which allow small-business owners to borrow money at low-interest rates to hire and retain employees and purchase inventory or even pay down debt.

Although Vice President Biden celebrated the fact that the economy was now adding an average of 700,000 new jobs each month, he also said that the recovery was still ongoing.

Although America is in far better condition than it was seven months ago when he became the presidency, he said that the country is now in a "difficult stretch" that may continue for a long time.

The president said he would send "reaction teams" that would comprise specialists from a variety of government departments "to stop the spread of Covid-19," which would be in addition to the health care teams that have already been sent by the federal government, according to the Vice President.

He also promised to improve the availability of medicines that have been evaluated and approved by physicians, including boosting the number of monoclonal antibodies sent to the United States.

Biden On Vaccine Requirements: 'This Is Not About Freedom Or Personal Choice.'