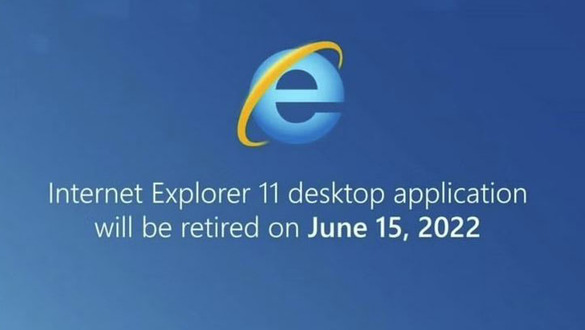 Microsoft will discontinue Internet Explorer 27 years after it was initially released. On Wednesday, users will be redirected to Microsoft's newest browser, Edge.

Back in the day, Internet Explorer had a stranglehold on 95% of the browser market.

Internet Explorer, popularly known as "IE," is being replaced by Microsoft Edge. The corporation released this web browser in 2015, but a very small percentage of people use it.

At one point in time, Internet Explorer, or IE as it was more often known, dominated 95 percent of the market for browsers.

The business had previously declared that it would stop providing support for Internet Explorer on June 15, 2022, and it did so while praising Edge as being superior.

With the release of Windows 10, Microsoft rebranded its web browser like Edge, yet, the company continued to use its proprietary technology to render websites.

This is no longer the case with the most recent version of the Edge browser, which uses the same Chromium page-rendering code as Chrome. The previous version of Edge is called "legacy Edge."

The team working on Internet Explorer (IE) eventually grew bored of playing catch-up and whack-a-mole and decided to contribute code to the Chromium open-source browser and use it as the foundation for developing their own new version of Edge.

Before competitors such as Mozilla's Firefox and Google's Chrome stole users away, Internet Explorer was the browser of choice for Windows-based personal computers for many years.

When Microsoft first introduced Internet Explorer in August 1995, its primary competitor was Netscape Navigator, which had debuted the year before as the first commercial browser for the then-emerging World Wide Web. Internet Explorer was Microsoft's first attempt at creating a web browser.

The United States Department of Justice filed a lawsuit against Microsoft in 1997 in what would become a historic antitrust case. The lawsuit alleged that Microsoft unlawfully connected the Internet Explorer browser to the Windows operating system.

The Department of Justice (DOJ) successfully approved an initial ruling that would have split Microsoft into two separate entities: an operating system company and an applications company. However, the District of Columbia Court of Appeals rejected the idea that Microsoft should be broken up as a remedy for anticompetitive behavior.

In 2002, the Justice Department reached an agreement with Microsoft that resulted in a settlement. As part of this deal, Microsoft agreed, among other concessions, to share Windows application programming interfaces (APIs) with third parties.

Microsoft announced that it would stop providing support for Internet Explorer on all of its Microsoft 365 products in the year 2020.

According to a research company called Statcounter, the web browser industry is currently dominated by Google Chrome.