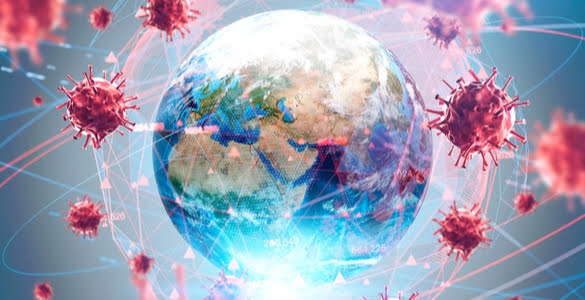 The worldwide number of Covid-19 cases has topped 300 million as the Omicron variant continues to spread across borders, pushing cases to new heights.

It took over a year to record the first 100 million coronavirus infections and less than half that time to record the following 100 million. Large swaths of the world's population, rich and poor alike, remain unvaccinated, and a rapidly spreading new strain has demonstrated capable of infecting even those who are vaccinated against the disease as third 100 million arrived even faster, in only five months,

Despite their inaccuracy, case counts have been a critical barometer throughout the pandemic, acting as a baseline for governments implementing mitigation measures and citizens attempting to assess the threat in their communities and neighborhoods. Although reaching 300 million known cases — a milestone reached on Thursday — is a significant achievement, according to the Johns Hopkins University Center for Systems Science and Engineering, it comes when an increasing number of specialists believe it is time to stop focusing on case counts.

According to preliminary findings, the new Omicron strain appears to be causing severe disease in fewer persons than previous strains of the virus. Research suggests that Covid vaccines continue to protect the virus's most potent manifestations of the disease. In addition, while the number of reported cases is increasing at an alarming rate around the globe — with record highs in the United States, Australia, France, and many other countries — hospitalizations and deaths related to Covid is increasing at a slower rate.

On the other hand, scientists are afraid that the sheer number of likely cases will continue to strain healthcare systems that previous outbreaks of the virus have already stretched.

This week, Dr. Anthony S. Fauci, stated that it was past time to stop relying on case statistics to guide public health policy.

"As time progresses and infections become less severe, the need of focusing on hospitalizations becomes much more relevant," Dr. Fauci said in an interview with ABC News on Sunday.

Approximately 60% of the world's population has received at least one dose of a Covid vaccination. Still, approximately three-quarters of all doses have been delivered in the world's wealthiest countries, leaving persons in Africa and Asia at risk of contracting the disease.

According to the Centers for Disease Control and Prevention, 610,000 cases are reported daily in the United States, a 227 percent rise from two weeks earlier. Hospitalizations are increasing at a slower rate, with an increase of 60 percent in the last two weeks, while deaths are growing faster, rising 2 percent. Average daily cases in France have quadrupled to an all-time high, according to the Our World in Data project at Oxford University. In contrast, hospitalizations have grown by nearly 70% and deaths by more than twice.

In part, this is due to the increased protection afforded by vaccines, which has reversed the gloomy cadence observed over the previous two years: a wave of infections, followed by a surge in hospitalizations, and finally a wave of deaths.

Furthermore, suppose at-home testing becomes more widely available in the United States and Europe. In that case, official case figures — which scientists have long contended are undercounted — may stray even further from actual totals than they already do. Many people may never get tested because not all home tests are reported to the authorities. The Centers for Disease Control and Prevention (CDC) estimated that only one out of every four infections in the United States was documented even before Omicron came into existence.

Robert West, a professor of health psychology at the University College London, case counts "definitely mean less now than they did earlier in the pandemic." "If we'd had this many diseases back then, we'd have had an amazing number of deaths."

Although the known death toll has decreased, it continues to be devasting: over 830,000 in the United States, 620,000 in Brazil, and nearly 500,000 in India. In many developing nations with large gaps in health data, the precise quantity may never be known.

Furthermore, Omicron's influence may be more severe among persons who have had less vaccine protection. African countries with the lowest vaccination rates are suffering some of the most severe rises in infection rates, according to the WHO. Only a few African nations are on track to meet a World Health Organization goal of providing two doses to 70 percent of their population, even though wealthier countries have provided a third dose to their citizens.

In a statement released on Thursday, Tedros Adhanom Ghebreyesus, director-general of the World Health Organization, said that "boosting after booster in a small number of countries will not halt a pandemic while billions remain completely vulnerable."

In the opinion of many experts, the virus will become endemic, something that the world will have to deal with for years to come, similar to the influenza virus, and that by the time the world records 400 million cases, as it will undoubtedly do, that statistic will mean even less than it does today.