$27.6 Billion Sucked Out U.S. Stock Market. The Second-Biggest Draw Down in History! 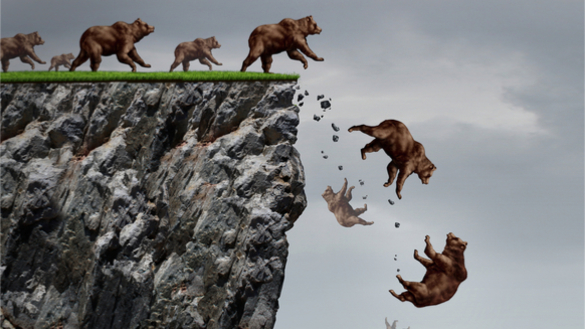 Is this a signal that we’re in for another big sell-off that takes us to 21,600 on the Dow Jones, a 20% correction that will signal we’re in a bear market?

President Trump took great pleasure in celebrating and taking credit for creating $6 trillion of d new wealth as the Dow Jones soared over 26,951. Now Trump’s not nearly as public in his celebration of the market.

The Dow Jones closed today at 24,100, down 2,900 points well exceeding the 10% that qualifies this sell-off as officially a correction. The question now is will the U.S. stock market fall below 21,600 which would confirm that we are officially entering into the bear market.

“The problem is we are not that oversold at this point even with this 10% sell-off.” say’s Geoff Garbacz, the Chief Technical Analyst of WallStreetRebel.com.

“At the outset of this move down, we predicted we would hit 24,100 on this sell-off. We've now tested that support level twice in the last 45 days, and yet our technical indicators are only showing we’re only modestly oversold.”

“There’s a real danger that we’re going to see another 1000 to 1500 points trimmed off the Dow Jones before we see the market get to a really oversold condition that we could reliably enter long positions that would benefit from a bounce back,” says Garbacz.

“I’m optimistic we may be looking at a 2010 market scenario where after the next leg down when all looks lost and despair peaks, we could see a rally that takes the Dow Jones, S&P and Nasdaq all climb all the way back to their 2017 highs. The downside is we have more work to do on the down side.” Laments Garbacz. “More pain ahead. Friday’s are rarely the day the market bottoms. Monday could be a very dark day on Wall Street.”

Michael London the Co-editor of the WorldOpportunityInvestor.com  isn't as optimistic.  “We could be stuck in this equity market meltdown for as long as President Trump fights the slings and arrows of his increasingly outrageous scandals, trade wars, and exploding deficit spending.” London points out …

“U.S. stock funds saw redemptions of $27.6 billion in the last five days of trading ending on Dec. 12, 2018. That’s the second-biggest weekly exit on record, according to Bank of America Merrill Lynch, and doesn't include today’s almost 500 point nose-dive. Today’s nose-dive in the S&P 500 Index makes this the worst week for S&P since March, according to BofA’s note, which cited EPFR Global data and the second-biggest rush of redemptions since February.”

“We have now seen more than $4 trillion in U.S. equities wiped out since September. Maybe President Trump will be able to get a grand bargain with China and the myriad of other countries he’s currently waging a trade war against” offers James Davidson, the editor of Strategic Investment.  Then again we may not, and instead hear him instead of keep threatening the U.S. manufacturers like General Motors and Harley Davidson, which would just continue this sell off all the way back to where this market started on November 7th, 2016 after the election.