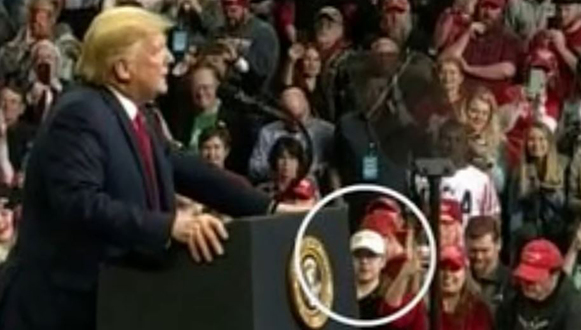 Rittenhouse at a Trump Rally

President Trump and FOX News celebrate and applaud their murderous hero who shot and killed two protesters.  They are ignoring the fact he was only a 17-year-old teen. He had access to a weapon of war and took it upon on him to travel 20 minutes from his home to act as judge and juror and shoot to death the two unarmed protesters.

Donald Trump warns about America becoming a lawless society if former Vice President Joseph Biden wins the Presidency on November 3, 2020. Yet, Donald Trump’s vigilantes are literally beginning to be whipped up by the President’s and the networks rhetoric to start killing peaceful protesters literally.

Innocent until proven guilty Kyle Rittenhouse has charged with shooting and killing two unarmed men during this week’s violent demonstrations in Kenosha Wisconsin will remain in Lake County, Illinois, for another month. Judge Paul Novak on Friday hearing a motion for extradition allowed a delay in the court process that could send him immediately to Wisconsin to face the charges.

Judge Novak granted a 30-day continuance during a brief online status hearing on Rittenhouse’s potential extradition to Kenosha County, where he faces a murder charge and several other counts. The assistant public defender representing him in the extradition case, Jennifer Snyder, asked for the delay. Rittenhouse’s next hearing is now scheduled for September 25, 2020.

If convicted of the first-degree intentional homicide charge as an adult, Rittenhouse could face a life sentence, but because Wisconsin does not have the death penalty, he is under no threat of a death sentence in his home state.

Rittenhouse was caught on film and now stands accused of shooting two men Tuesday night as numerous civilians acting as vigilantes armed with rifles showed up and further aggravated the violent demonstrations that raged for three nights in Kenosha.

The protests, clashes with police, and angry protests were set off by an officer’s shooting of Jacob Blake, a 29-year-old Black man in his back at point-blank range. Too many who have seen the film, Blake, who was unarmed and walking away from the police, appeared to be executed by the police officer.

Witnesses account say that Rittenhouse was allowed to escape from the murder scene by Kenosha police was arrested as a fugitive Wednesday in Lake County, Illinois, a few hours later. Rittenhouse is being charged in Wisconsin as an adult and is being held without bail at the Lake County juvenile detention facility.

Records show Rittenhouse has worked as a YMCA lifeguard. His social media postings show that he idolizes police and has participated in programs for aspiring cops. He has also been identified as a rabid supporter of President Trump.

There are numerous video clips posted online appear to show Rittenhouse at the scene Tuesday night with a rifle, including several that show him shoot and the deadly consequences of his firing his semi-automatic weapon.

The videos also indicated show he approached police before the shootings despite being out past curfew and a year too young to carry a gun openly in Wisconsin. The reality that he was parading around after curfew with a semi-automatic weapon has infuriated many who point to his ability to act this way in front of the police is an example of the outright double standards of the Kenosha police department. Being white allows white vigilantes to get away with murder while an unarmed black man rather than being restrained and placed in custody gets shot seven times in his back in front of his children.

Kenosha police detectives are now faced with videos of the murders and numerous witnesses who appear to make charges filed against Rittenhouse iron clad. According to the charges, the semi-automatic weapon used by Rittenhouse was a Smith & Wesson AR-15-style .223 caliber rifle with a 30-round magazine.

One video in possession of the Kenosha police investigation and the press shows Rittenhouse running across the parking lot of an auto dealer where cars had previously been burned, trailed by Joseph Rosenbaum, 36, of Kenosha, prosecutors wrote. Behind Rosenbaum was Richard McGinnis, a videographer at the Daily Caller, a conservative website.