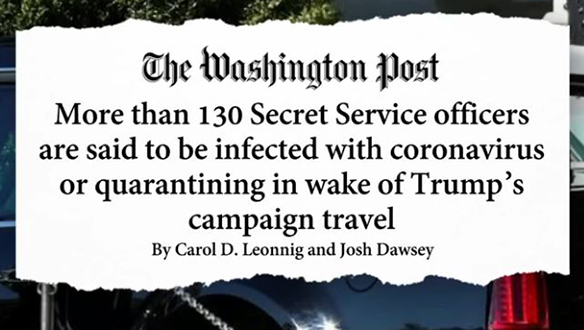 President Trump campaigned across the country, sometimes making as many as three stops a day, with his secret service detail. Now 130 agents are either in quarantine because they have Covid-19 or suspect they have it. One agent is reportedly on a ventilator.

Yesterday, 161,154 Americans were diagnosed as being infected with Covid-19. Across the United States Over 65,000 are hospitalized, of which 19,261 are in serious or critical condition and 1,190 died yesterday of the disease. And, yet not a single word from President Donald J. Trump.

The Washington Post (WAPO) reported a few minutes ago it was reported that more than 130+ Secret Service agents have either been tested and diagnosed with Covid-19 or have been ordered into quarantine because they are believed have had close contact with infected co-workers, according to three people familiar with agency staffing.  According to WAPO…

While campaigning during this ongoing global pandemic, President Trump joked about “sleepy joe” President-Elect Joseph Biden hiding in his basement and fearing the dreaded Coronavirus. It was a joke that wasn’t very funny to intelligent people.  What wasn’t funny either was Trump’s reclass barnstorming across the country. The spread of the coronavirus — which has sidelined roughly 10 percent of the agency’s core security team — is believed to be partly linked to a series of campaign rallies that President Trump held in the weeks before the November 3 election, according to the people, who, like others interviewed for this report, spoke on the condition of anonymity to describe the situation especially now.

President Trump is entirely indifferent to the pandemic’s effects on even those working in the White House and is wholly consumed with trying to overturn the November 3, 2020 general election results.

While the coronavirus outbreak is dramatically impacting the Secret Service’s presidential security unit, growing numbers of prominent Trump campaign allies and White House officials continue to fall ill in the wake of campaign events. Trump insisted on ignoring social distancing and at which many attendees did not wear masks.  Frankly, Donald Trump cares about nobody but Donald Trump.

Those in the White House who are confirmed as being infected include Chief of Staff Mark Meadows and outside political advisers Corey Lewandowski and David Bossie. Also, at least eight staffers at the Republican National Committee, including Chief of Staff Richard Walters, have come down with the potentially deadly virus. The number of campaign workers infected who worked out of campaign offices across the country is unknown, but most of these Trump campaign offices are believed to been infected in large staff gatherings.