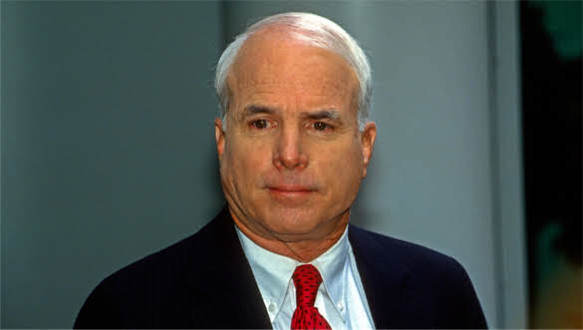 To understand the man’s followers, you must first understand the man.  It the man has true values, integrity, is a humanitarian, is a patriot, has a truly ethical compass and is loyal and faithful to his family, you can correlate that his staff and follows equal share values. That man is the former United States Senator of Arizona, John McCain.

The remarkable life and times of Senator John McCain

It truly bothers me to place the name John McCain and Donald Trump into the same sentence, but it essential to read the following facts about Sen. McCain’s life and measure them to what you know about Donald Trump.

These are not tributes to a man’s life. These are the real facts to the life of John McCain American hero. If you are a person of conviction and a loyal Republican who was an aide to the late Senator, this is how you memorialize his life. But first, this is the United States Senator John McCain’s life:

· John McCain graduated 5th from the bottom of his class at the Naval Academy, but was known as a fierce fighter, a loyal friend and a leader among his peers.

· John McCain helped save lives during a massive fire on the U.S.S. Forrestal.

· John McCain fought for his country in the Vietnam War.

· John McCain crashed his jet twice, and a third time was shot down and taken prisoner in Vietnam.

· John McCain was held for 5 years in a Vietnamese prison and brutally tortured.  He refused early release because his father was an Admiral, insisting on upholding the code of honor that those taken first must be released first.

· As a U.S. Senator and Chairman of the Armed Services Committee, John McCain was among the Senate’s staunchest supporters of our men and women in uniform.

· John McCain resolutely insisted on making sure our service members had the funding, equipment, training and support they needed.  He insisted that they be given clear missions, and he held both civilian and military leaders to account.

· John McCain insisted that the Armed Services Committee do its job by passing a defense authorization bill each year.

· Last year’s National Defense Authorization Act was named for Senator McCain in honor of his long support for our nation’s military.

· John McCain insisted that the Pentagon never give up on obtaining a full accounting for all of America’s POW/MIA’s.  He worked with the U.S. and Vietnamese governments to get a full accounting of POW/MIA’s, and to expose frauds perpetrated against the families of MIA’s.

· John McCain fought to make sure America kept its promise to its veterans.  He held Veterans Administration leaders to account in failing to provide proper health care, including in his home state of Arizona.

· John McCain authored legislation to redress the failure of the VA to provide proper health care – the “Choice Act” – as well as the Veterans Suicide Prevention Act.

John McCain and the Iraq War

· After the attacks of 9/11, John McCain supported President Bush in launching the Iraq War in 2003, along with the vast majority of U.S. Senators and Congressmen.

· John McCain quickly became a critic of the Administration’s handling of the war, however, on everything from ensuring we had adequate troops on the ground, to working with Allies, to calling out and condemning torture.

· John McCain supported President Bush’s decision to launch a surge in Iraq when most other politicians and commentators were against.  The surge helped bring the Sunnis in Iraq into the government, paving the way for the more stable Iraq we have today.

· John McCain opposed the early withdrawal from Iraq – which led to the growth of ISIS – and supported early intervention in Syria, which would have prevented the spread of ISIS.

· John McCain always called on America to stand up for its values of freedom and democracy, and saw these as essential to advancing America’s interests and national security in the world.

· John McCain consistently stood up for those whose rights were abused, against authoritarians and dictators.

· Having been tortured by his Vietnamese captors, John McCain wanted to be sure that the America he loved never itself engaged in torture.  After the Abu Ghraib scandal, he was the principal sponsor of legislation to prohibit the United States from engaging in torture of any kind.

· John McCain was a principal sponsor of legislation to sanction human rights abusers, known as the Magnitsky Act, in remembrance of U.S. businessman Bill Browder’s attorney who was killed in a Russian jail.

· John McCain was a key member of a bipartisan group of Senators who sought to fix U.S. immigration law in the 2000’s.  Even then, his position was anchored firmly on “comprehensive” immigration reform, which meant both securing the border, and identifying a path to legalization for those who are already in the U.S. illegally.

· John McCain was the original “drain the swamp” Senator.  He was deeply concerned about the influence of money in politics and sponsored legislation seeking to limit that direct influence.

· John McCain was always against pork barrel spending and as a tool to inform the public, published an annual list of appropriations of funding that were not authorized by the relevant Senate committees.

· John McCain voted against the bill presented to the U.S. Senate – his famous “thumbs down” – because it was “repeal,” without “replace.”

· John McCain wanted “replace” and he urged that the legislation go through the “regular order” in the Senate, to make sure it was well thought out and supported, rather than through a lateral move outside the regular order.

· Legion of Merit with “V” device

· Navy and Marine Corps Commendation Medal with one gold star and “V” device (denoting 2 awards total, one with the Valor distinction)

If you were able to rationalize any of this amazing man’s life facts to that of President Donald J. Trump's life, you are delusional.

So just how does the former staff of Senator McCain pay tribute to their former bosses’ life.  Over 100 former staff members from the late Sen. John McCain’s, R-AR., campaigns, and congressional offices announced Thursday that they are endorsing Joe Biden for president.

“Given the incumbent president’s lack of competent leadership, his efforts to aggravate rather than bridge divisions among Americans, and his failure to uphold American values, we believe the election of former Vice President Biden is clearly in the national interest,” they said in a letter.

A political action committee, 43 Alumni for Biden, that launched last month, posted a list of nearly 300 members of the Bush administration or campaigns who are publicly backing Biden. The names range from members of the Cabinet, including former Secretary of Commerce Carlos Gutierrez and former Secretary of Agriculture Ann Veneman, to ambassadors, to White House and advance staffers.

It just goes to show there is a Republican Party membership that still lives and retains the party’s ethical values.